Big buybacks are helping Sonic tread water as it tries to grow its sales again.

Shares of Sonic (SONC) tumbled 5% on June 27, after the fast-food chain posted mixed third-quarter numbers. Its revenue fell 5% year over year to $118.3 million, which missed expectations by $0.35 million and marked its eighth straight quarter of declining sales.

Sonic's comparable-store sales dropped 0.2% at both its franchised and company-owned locations. It also expects flat to -1% comps for the full year. 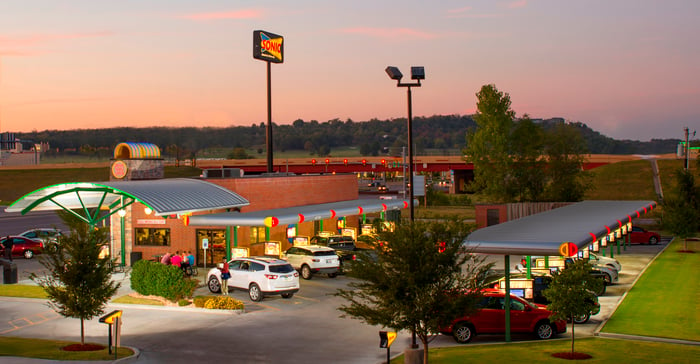 On the bright side, Sonic's non-GAAP net earnings per share rose 21% year over year to $0.52, which cleared expectations by $0.03. Tax reform benefits notably boosted EPS by $0.06.

These growth figures look mixed, yet Sonic's stock remains up about 25% for the year. Why are investors seemingly bullish on this slow-growth stock in a tough sector?

1. A shift toward franchising

During the first nine months of fiscal 2018, Sonic cut its total company-owned store count by 51 locations year over year to 179 locations. It sold 49 of those locations to franchisees during that period. Meanwhile, its franchisee store count rose from 3,341 to 3,410.

Revenue from franchise leases, royalties, and fees accounted for 41% of Sonic's top line during the first nine months of fiscal 2018, compared to 36% in the prior-year period. Sonic believes this ongoing shift, along with menu changes and new personalized mobile ordering options, will eventually boost its sales growth back to positive territory.

During the conference call, CEO Clifford Hudson stated that adverse weather conditions in previous quarters obfuscated some of those improvements, but that those headwinds were now "hopefully behind" the company. If we compare Sonic's third-quarter numbers to the previous few quarters, we can see that a turnaround could happen in the near future.

Sonic expects to report positive comps for the fourth quarter. It didn't disclose an exact figure, but its forecast for "down 1% to flat" comp performance for the full year indicates that it could offset most of its comp sales declines from the first nine months of the fiscal year.

Sonic's EPS growth can be partly attributed to tax reform benefits and its emphasis on franchising, but buybacks also play a major role. Sonic repurchased $109 million in stock during the first three quarters of fiscal 2018, which reduced its share count by nearly 10%. The company is still authorized to spend $391 million more on buybacks through fiscal 2021, so investors are counting on Sonic to keep buoying its earnings with buybacks as its revenue stays stagnant.

Sonic also pays a decent forward dividend yield of 1.8%. That's lower than McDonald's 2.5% yield, but Sonic has hiked that payout annually for the past three years. Sonic plans to return a "cumulative $500 to $600 million" to investors from fiscal 2018 to fiscal 2021 "through a combination of dividends and share repurchases."

On the surface, Sonic seems like a weaker fast-food play than heavyweights like McDonald's. However, the company's generous buybacks could keep boosting its EPS until its sales growth accelerates again. 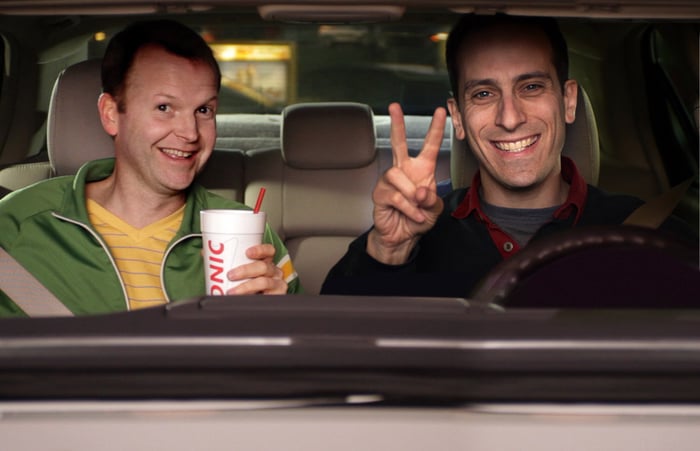 I'm not sure this strategy makes Sonic a great investment -- since it isn't particularly cheap at 21 times forward earnings -- but it explains why Sonic stock has soundly crushed both McDonald's and the S&P 500 this year.