If you're looking for solid dividend stocks to buy, the 30 members of the Dow Jones Industrial Average index is a pretty good place to begin your search. The Dow contains the bluest of blue-chip stocks, and all of them pay dividends. But some of those dividends are certainly better than others.

Three of the top Dow dividend stocks, in my view, are IBM (NYSE:IBM), Pfizer (NYSE:PFE), and Verizon Communications (NYSE:VZ). Here's why they're solid picks right now for long-term investors. 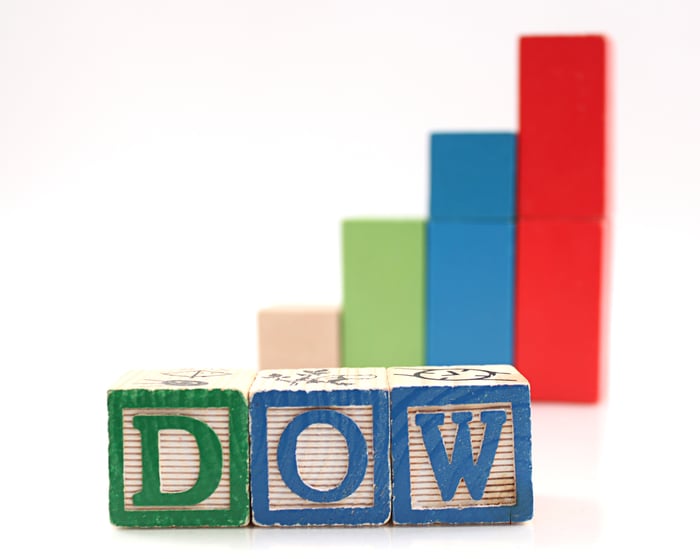 IBM's dividend currently yields 3.95%. The technology giant has paid a quarterly dividend every year since 1916 -- an enviable track record. IBM is also only three years away from qualifying as a Dividend Aristocrat, potentially joining an exclusive club that includes only S&P 500 members that have increased their dividends for a minimum of 25 consecutive years.

At first glance, IBM's payout ratio of 96% could be alarming. However, the company's dividend should be relatively safe. IBM's earnings, which constitute the denominator in the payout ratio, were artificially lower in 2017 due to a big one-time tax payment. Dividend payments over the last 12 months used up less than 43% of IBM's free cash flow, which indicates the company shouldn't have a problem keeping those nice dividend checks flowing.

It's true that IBM has faced challenges in recent years. Prior to 2017's fourth quarter, the company had reported year-over-year revenue declines for 22 consecutive quarters as it struggled to respond to new market dynamics. Even with the tech giant's return to growth in Q4, it still won't generate huge growth.

But for income-seeking investors, modest growth isn't a problem. IBM has shown in the past that it can adapt and survive. The company has placed big bets on technology, including artificial intelligence (AI), blockchain, and quantum computing, that should pay off over the long run. I suspect Big Blue will retain its blue chip status for a long time to come.

Pfizer pays a dividend with a current yield of 3.82%. For many years, Pfizer claimed a spot among the Dividend Aristocrats. However, in 2009 the big pharma company slashed its dividend to help fund the acquisition of Wyeth. Pfizer returned to steady dividend hikes in subsequent years.

The prospects for more dividend increases from Pfizer in coming years appear to be good. Pfizer currently spends less than 54% of its free cash flow to fund the dividend program. The company's executives consistently rank dividend payments as the top priority for capital allocation.

Pfizer's earnings growth should also improve. Between 2005 and 2010, the drugmaker launched two blockbuster drugs. Over the next five years, Pfizer launched five blockbusters. But between 2017 and 2022, the company thinks it can win approval for as many as 15 new drugs or new indications for existing drugs with blockbuster potential.

In addition, Pfizer should move past some of the issues that have weighed on its performance in recent years. The negative impact from loss of exclusivity for older drugs should decrease in the future. Pfizer also expects to make progress in alleviating product shortages that have caused weakness for its sterile-injectables business. The combination of resolution of these problems and the potential for its pipeline should help Pfizer remain one of the best big pharma dividend stocks on the market.

Verizon's dividend yields 5.03%, the highest of these three Dow stocks. The telecommunications company has increased its dividend in each of the last 11 years.

But can Verizon keep the dividends coming? The normal metrics used to answer the question could be deceiving. The company currently has a payout ratio below 32%. However, that's skewed lower by a large one-time income tax benefit recorded in the fourth quarter of 2017. Verizon spent more on paying dividends than it generated in free cash flow over the last 12 months. That imbalance, though, was the result of some major capital expenditures last year. Overall, Verizon's dividend appears to be a pretty safe bet.

The telecom business is intensively competitive. However, Verizon has been able to attract customers without resorting to bundling video streaming services with its unlimited data plans. The company also has lower customer churn than its big competitors.

Verizon's biggest opportunity is probably in 5G wireless technology. With its new high-speed 5G networks, Verizon could offer new bundled products such as smartphone service with home internet, TV, and connections to cars. There are only a handful of telecom companies with the financial resources to build out 5G networks. Verizon is one of them -- and that should bode well for the company long-term.

I like all three of these Dow dividend stocks. My personal favorite, though, is Pfizer.

Unlike IBM and Verizon, Pfizer has grown revenue consistently over the last three years. The company appears to be in good position to pick up the pace even more over the next few years, with strong products like cancer drug Ibrance and anticoagulant Eliquis. I also expect Pfizer to make additional acquisitions that fuel even more growth. I own shares of Pfizer and intend to hold on to them for a long time.