Look to the past for a useful history lesson.

Investors were sad to see March end on a down note for the stock market. The Dow Jones Industrial Average (^DJI 2.80%) finished the quarter off more than 600 points from where it started the year.

The downward move to begin 2018 ended a streak of nine consecutive quarters of gains for the Dow. During that time period, the average rose more than 8,400 points, making up almost half of the Dow's entire gain of roughly 18,000 points throughout the course of a nine-year bull market. Some fear that the end of the streak could signal the beginning of a new bear market. 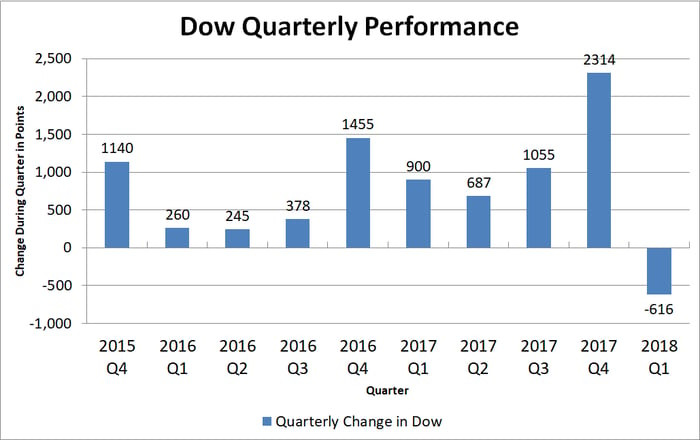 To counter that bearishness, some historical perspective is helpful. The last time the Dow had a streak this long was from 1995 to 1997, when the average rose 11 quarters in a row. After the down quarter that ended the streak, the Dow bounced back the following quarter with a gain of more than 11%. Despite further volatility, the average eventually climbed more than 45%, from around 7,900 at the end of 1997 to almost 11,500 by the end of 1999.

Fearful investors will always find reasons to be nervous about the market's future. Yet over long periods of time, stocks have shown a level of stability that has always helped them bounce back from declines. That's no guarantee that the bull market will last another two years and add further huge gains, but it does point to the likelihood that long-term investors will be happy with their future returns.