The company is doubling down on the data center market.

NVIDIA's (NVDA 2.60%) CEO, Jensen Huang, announced its latest data center workhorse, the DGX-2, at the company's GPU Technology Conference (GTC 2018) this week. The deep-learning supercomputer builds on the success of the company's DGX-1 by making it 10 times more powerful than the previous version.

NVIDIA says the jump comes from the addition of new Tesla V100 32GB graphics processors, which have twice as much memory as before, and a new NVSwitch that allows all 16 chips to communicate with each other at record speed. NVIDIA says the DGX-2 is also the world's first 2-petaflop deep-learning computer -- a petaflop is equal to 1 quadrillion floating operations per second -- because the GPUs share unified memory space.

"DGX-2 has the deep learning processing power of 300 servers occupying 15 racks of datacenter space, while being 60x smaller and 18x more power efficient," the company said in a press release.

In short, the company packed the new DGX-2 with more GPUs than before, gave them more memory, and created a new way for them to communicate with each other -- so that the entire system is far more powerful than the DGX-1, while being smaller and more efficient. 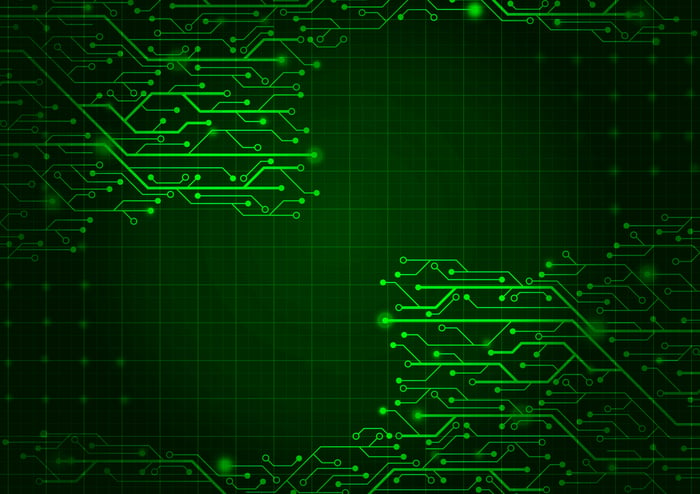 NVIDIA's data center segment grew by an impressive 104% in the recent fourth quarter. The company's GPUs are some of the best in the business for deep learning; management projects that NVIDIA's total addressable market for deep-learning training will be $11 billion, and that deep-learning inference (when an AI system infers things based on its previous training) will be a $15 billion opportunity by 2020.

Data center sales only make up about 21% of NVIDIA's sales right now, but that's up from just 13.5% in the year-ago quarter. This segment is becoming more important to NVIDIA, as the world's leading cloud computing players, Amazon, Microsoft, and Alphabet's Google, have adopted NVIDIA's deep-learning technology for their own services. Public cloud computing services are expected to grow into a $411 billion market by 2020, up from $260 billion in 2017, according to Gartner. The key cloud players are increasingly looking at artificial intelligence services to offer their customers; that means that deep-learning supercomputers like the DGX-2 will likely grow more along with this expanding market.

NVIDIA has found that offering high-end GPUs for everything from the discrete desktop GPU market to data centers and semi-autonomous vehicles can pay off. In the company's recent fourth quarter, total sales jumped 34% to $2.91 billion, and GAAP (generally accepted accounting principles) earnings per diluted share popped 80% to a record $1.78; the company ended its full fiscal year 2018 with record sales of $9.71 billion, a 41% year-over-year increase.

With DGX-2, NVIDIA appears to be doubling down on its deep-learning opportunities and working to maintain its leadership position in the data center and AI spaces. That's great news for current NVIDIA shareholders.

However, the company's share-price gains of about 100% over the past year -- and mind-boggling 950% gains over the past three years -- mean its shares are trading at a premium of about 30 times forward earnings. That doesn't mean NVIDIA's run is over, but investors buying in now should know how much the company's opportunities in AI are already baked into the price.