The biggest name you've never heard of needs a place on your radar.

You can be forgiven if you've never heard of Tencent (TCEHY -2.33%). Until last year, I only vaguely knew of it as a technology player in China -- but the details of what the company actually did were murky.

My view started to change -- markedly -- as I read about all of the well-known U.S. companies that Tencent was buying stakes in, including Tesla, Activision Blizzard, and Snap. Once my interest was piqued, I was sold. The company has quickly come to occupy over 3% of my real-life holdings, and I have plans to add to that stake over the coming years.

One-third of WeChat's billion users are on the app for more than four hours per day. Image source: Getty Images

Here are my seven big reasons for being so excited by the company and its potential to create lasting wealth for my family.

1) The compass guiding all decisions

Most investors don't bother to check out a company's mission statement. I think that's a big mistake. A well-written mission statement isn't a guarantee for long-term success, but I do think it's required for a company to have a chance at being a wealth-creating investment.

The best mission statements have three things in common:

"To enhance the quality of human life through Internet services."

We'll get to how Tencent is currently trying to do that below. But for now, it suffices to say that this easily checks all three of the required boxes of a great mission statement.

I'm also a sucker for founder-led companies. If someone is just building organizations for the sake of getting rich, they would cash out immediately following a company's IPO. For founders that stay on board, there's much more at stake -- often at an existential level. That means that the leader of a company is squarely focused on building something that will survive long after he/she is gone.

Tencent was founded by Ma Huateng -- otherwise known as Pony Ma -- in 1998. In the intervening twenty years, he has remained at the helm, and shows no signs of slowing down any time soon.

3) Management with skin in the game

Equally important, I like it when the founder has lots of his/her own skin in the game via stock ownership. Sure, they may not be in it just for the money, but it's important to have something to lose, and stock ownership does that. It also helps guarantee that management has significant voting power if outside forces ever attempt to fundamentally change the company.

According to a recent CNN report, Ma has a stake of nearly 9% in Tencent shares.

Now we get to the meat of what Tencent actually does. In the beginning, a messaging system dubbed QQ was the workhorse. Since then, however, the company has found lots of ways to "enhance the quality of human life through Internet services."

The most important piece right now is WeChat -- a mobile application that has no peer here in the United States. It is part messaging system -- voice, video, and text -- part ride-hailing, part micro-social media, part payment systems. The app has over one billion followers, and one-third of those followers are on it for over four hours per day!

But it's about more than just WeChat. Tencent is also the world's largest gaming company, with games including Honor of Kings and League of Legends. Unsurprisingly for a company with such a reach, it also has a burgeoning advertising businesses as well. Here's what growth has looked like: 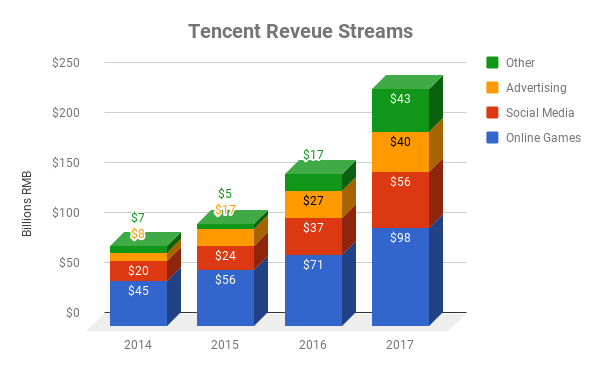 5) A wide moat around the business

As impressive as that growth is, however, it wouldn't mean much if Tencent didn't have a moat around its various lines of business.

But investors can breathe a sigh of relief, because the company benefits from all four of the major moats a company can enjoy.

There's really no telling what could be next for Tencent. The company's mission statement and history prove that as long as a service could "enhance the quality of human life," Tencent is willing to gamble on it.

The company is rapidly deploying AI services and has a growing cloud-computing division. Tencent announced a new program last year -- Mini Programs -- that essentially let other apps run on the WeChat app (creating apps within an app). And it's hard to tell where the company's aforementioned equity investments may take it, including its many smaller investments in homegrown (Chinese) businesses.

None of these ventures would mean anything, however, if Tencent didn't have the financial fortitude to attempt to tackle such ambitious projects. On that front, however, Tencent has enviable strength.

Crucially, this cash balance does not include some of the more illiquid investments the company has made in some of its associates.

Take all of these things together and you have a company that -- despite its $534 billion market capitalization and revenue growth of 56% over the past year -- is still trading for a reasonable 36 times trailing free cash flow.

While the valuation may change over time, the seven strengths above have far more staying power. That's why I think now is a good time to consider buying shares of Tencent and never selling them. My own skin is already in the game.