Please ensure Javascript is enabled for purposes of website accessibility
Log In Help Join The Motley Fool
Free Article Join Over 1 Million Premium Members And Get More In-Depth Stock Guidance and Research
By Neha Chamaria – Apr 3, 2018 at 9:30AM

If you believe the company is headed further north, then Deere and Kennametal shouldn't be far behind.

Caterpillar Inc. (CAT 4.91%) has been one heck of a stock in the past year. Despite losing ground in recent weeks, the heavy-machinery manufacturer is still up nearly 59% in one year as of this writing. After a painfully long wait that lasted years, Caterpillar's key end markets have finally bottomed and are back on the growth track, helping the company turn its business around.

But while Caterpillar has grabbed the spotlight among investors, it isn't the only one benefiting from the broad-based recovery. Other players in the industry are also positioned to seize the opportunities; and if Caterpillar's order book is growing, can its suppliers be far behind? So if you're bullish on Caterpillar, take a look at Deere & Company (DE 4.72%) and Kennametal Inc. (KMT 5.69%).

As the world's largest construction-equipment manufacturer, you can't ignore Caterpillar's views on the industry. Having delivered the largest sales volume increase in construction industries across its three business segments in fiscal 2017, Caterpillar is more and more bullish on the industry. For 2018, it projects robust demand from North America, Europe, and the Asia/Pacific region, even as it expects the recovery in the Latin American and Africa-Middle East regions to gather steam.

Deere is among the world's 10 largest construction-equipment manufacturers and serves nearly all the markets mentioned above. 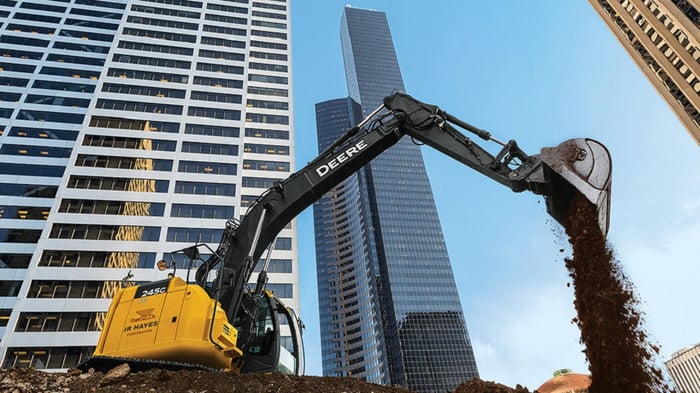 Construction and forestry contributed 22% to Deere's total machinery sales last year, with sales from the segment climbing 17% on higher volumes and prices. This year, Deere projects segment sales to (hold your breath) jump a whopping 80%, with 56% of the increase attributable to its recent Wirtgen Group acquisition. To put that number in perspective, Deere foresees only 15% growth in sales from its primary agriculture-equipment business.

In fact, the timing of the Wirtgen acquisition reflects Deere's optimism about the construction industry. As the world's largest road-construction equipment manufacturer, with a global footprint spanning more than 100 countries, Wirtgen should give Deere a push into the high-potential transportation side of construction. In 2017, transportation was the top capital-spending category, according to the National Association of State Budget Officers' latest state spending report.

Agriculture, of course, remains Deere's bread-and-butter business, but the company's position in the global construction industry gives investors good exposure. With the bulk of Deere's projected 25% increase in fiscal 2018 revenue likely to come from its construction equipment business, it's time you pay attention.

Kennametal is primed to grow

Kennametal is an established manufacturer and global supplier of metalworking, mining, and construction tools; cutting systems; and wear-resistant components. Through its namesake and WIDIA brands, Kennametal serves companies across several key sectors, including earthworks, energy, aerospace, transportation, and engineering.

Last October, Kennametal struck an agreement with Caterpillar to provide special-order rotors and earth-cutting tools through the latter's worldwide dealership network. Caterpillar, however, is just one of Kennametal's customers -- the list includes heavyweights like United Technologies, Boeing, General Electric, and Halliburton, to name a few.

Caterpillar's prospects are tied closely to the infrastructure, manufacturing, mining, energy, and transportation sectors, all of which are common end markets for Kennametal. Not surprisingly, Kennametal is now on a road to recovery after struggling for years, much like Caterpillar. 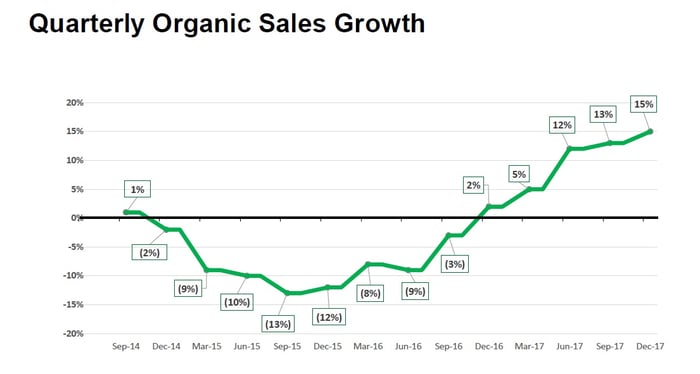 There are two points worth noting here: First, each of Kennametal's segments -- industrial, infrastructure, and WIDIA -- is contributing to its top-line growth. Second, markets across the globe are displaying higher demand. Such a broad-based recovery is likely to sustain itself longer than a sector-specific revival.

In February, Kennametal not only reported solid numbers for its fiscal 2018 second quarter, including a 17% increase in year-over-year sales, but also upgraded its outlook for the full year. 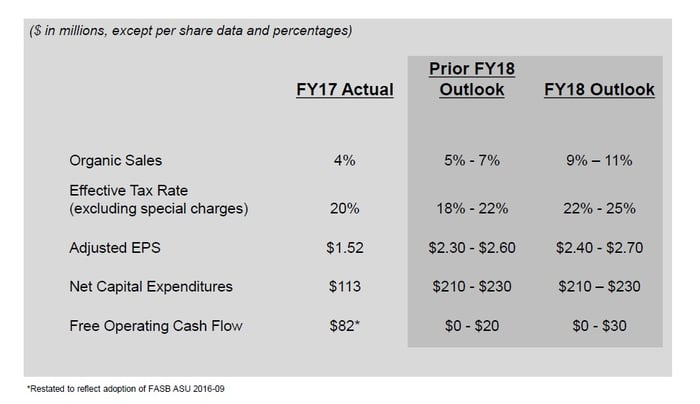 It's worth noting here that Kennametal was free-cash-flow (FCF) positive through the downturn. Its expectations of up to $30 million in FCF this year may sound uninspiring, but investors should know that the company is ramping up its capital spending for a three-year "modernization" program that could save it $200 million to $300 million in costs. If sales beat estimates, Kennametal could generate higher FCF.

Now that I have made a case for Deere and Kennametal, it's only fair that I also give you an idea about the kind of valuations that the stocks are commanding right now.

From a trailing price-to-earnings perspective, Deere is the pricier of the two at 35 times, compared with Kennametal's P/E of 22.8. However, both stocks are trading at a forward P/E of around 13, suggesting a high upside potential in earnings for both companies. It's also not unusual for cyclical stocks to command higher premiums when business cycles improve, so there's a fair chance that Deere and Kennametal could earn good returns for you in the long run.