If you don't have skin in the game, there's no filtering for the system to improve.

Few critics are as vocal in their distaste for a certain class of economists, statisticians, and finance journalists than Nassim Nicholas Taleb. But his aversion isn't without reason -- nor is it without proof.

Recently, I sat down with the best-selling author, trader, and professor to talk about a wide range of topics.

When it came to this class of professionals, Taleb laid out his thinking succinctly. 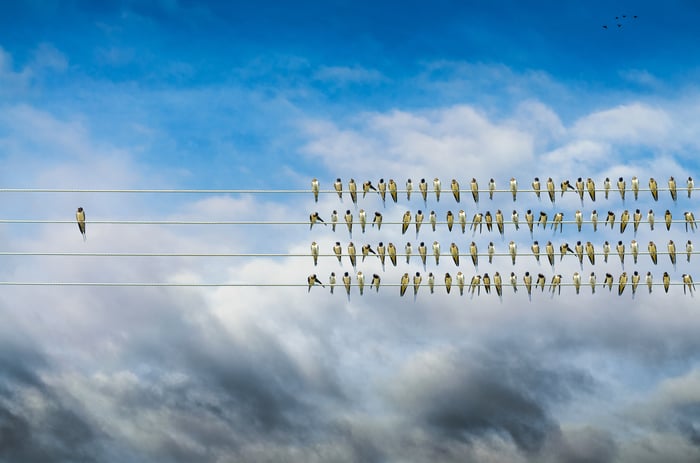 In The Black Swan, I noticed a a metric about forecasters -- or, securities analysts. They're basically in the same situation -- they are financial writers.

They make forecasts on the price of things...

But what we have is the exact opposite. In other words, the random variable is less volatile than the difference between what happens and the forecast.

This is a critical observation. Many in finance media are required to not own stocks of the companies they report on. But that reporting includes giving their opinion as to whether or not a stock is a "buy."

The thinking behind this is easy to follow: if reporters have a financial interest, they will likely be biased. But, Taleb would argue, this means that the opinions that these finance journalists give are largely "free" -- there's no price to pay for being wrong. And there are few thinks more onerous to Taleb than free opinions.

That helps explain why, when once asked on live TV to give his opinion on Microsoft stock, Taleb responded: "I own no Microsoft stock ... Hence I can't talk about it."

There's a saying in the finance community that, "No one ever got fired for buying IBM." It helps explain why actively managed funds often under-perform indices, and how human motivation plays a role.

It's easy for us to forget people who make big financial decisions are humans -- they have families waiting for them at home, mortgages to pay off, and kids to send to college. As such, they are often risk averse and seek stability.

Since many finance journalists can't benefit -- financially -- from a "rogue" market insight, there's no motivation to pursue them. When there's no financial reward to bucking conventional wisdom -- say, by shorting IBM -- then people will herd together to protect themselves.

On how traders are different from finance journalists

Clustering disappears when you trade. Because those who are wrong go bust. And it's not comparative: In trading, if you go bust, you go bust. [But finance journalists don't.]

In trading -- effectively -- there's a penalty for being a Me-Too person. Me-Too-ism is heavily penalized in trading. If you imitate others, you're going to be late to the game, and you will also -- of course -- be late in exiting.

So independence is what is required in trading at a minimum. And you should have that with journalists.

Does that mean that you should ignore anything written by someone without skin in the game? Not necessarily.

Instead, I suggest that you add another, counter-intuitive filter to your own stock-picking system.

Often times, we think: "I want stock advice from a completely unbiased analyst, who has nothing to gain or lose from their suggestion." On the one hand, this makes sense -- and I would suggest checking out the author's CAPS score to see if they have a history of successful picks.

On the other hand, you might want to ask this question: "This article claims Stock X is the top stock to buy this month. If it's such a great buy, then why doesn't the author own it him/herself?"

Of course, there are a myriad of innocuous explanations for why they might not: They having a growing family and no extra money to invest; they are carrying a large debt load for reasons entirely unrelated to their market insights; they're taking care of elderly family members.

But one fact rings true -- those who do have skin in the game are more likely to have done the research and have enough courage in their convictions to act on them. That's a powerful signal that investors shouldn't ignore.