Please ensure Javascript is enabled for purposes of website accessibility
Log In Help Join The Motley Fool
Free Article Join Over 1 Million Premium Members And Get More In-Depth Stock Guidance and Research
By Chris Neiger – Apr 3, 2018 at 6:04AM

Information is good; information you can actually use is far better.

NVIDIA (NVDA -2.30%) and Arm -- a subsidiary of SoftBank (SFTB.Y -3.17%) (SFTBF -1.93%) -- recently announced a partnership that will bring the two companies together to add deep learning to potentially billions of Internet of Things (IoT) devices.

Deep learning is a form of artificial intelligence (AI) that takes multiple pieces of data and layers them together so that a computer can understand something, similar to how we take in visual cues to understand our surroundings.

For example, Alphabet's (NASDAQ: GOOGL) (NASDAQ: GOOG) Google has used an artificial neural network to view images of a cat. It uses different layers of the algorithm to look at aspects of the cat image individually (colors, shapes, and other details); the final layer of the neural network puts all of the data together to determine that the image is indeed a cat.

ARM is implementing the open-source NVIDIA Deep Learning Accelerator (NVDLA) in its Project Trillium platform for chips, which will be used in mobile and IoT devices.

"The collaboration will make it simple for IoT chip companies to integrate AI into their designs and help put intelligent, affordable products into the hands of billions of consumers worldwide," the companies said in a press release. 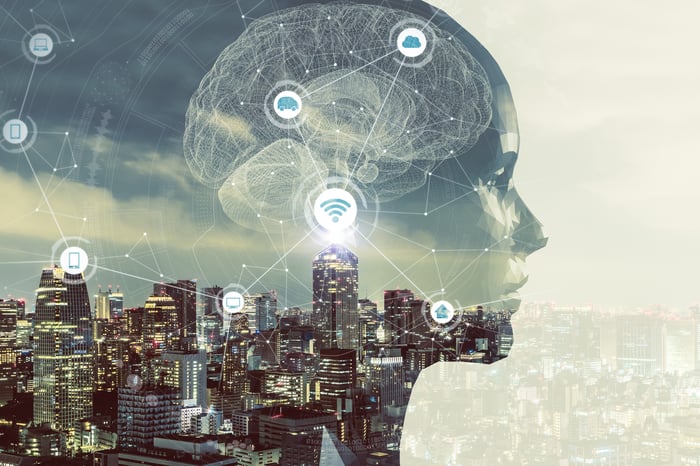 There's too much information

An estimated 200 billion things will be connected to the Internet by 2020, and they'll be collecting massive amounts of information. By some estimates, the average U.S. household will generate enough data to fill 318 32GB iPhones each year by 2020. This much data will be too cumbersome for humans to keep track of, and it'll be increasingly difficult to sift through it and pull out actionable insights.

But if NVIDIA and other companies are able to make IoT devices smarter, then they can begin to make their own decisions based on the data. One example would be an AI fitness tracker that can monitor your heart rate and recognize when there's an irregularity, or even predict a heart attack. That device, on its own, could then contact your doctor or emergency services when it notices a problem. For now, fitness trackers and smart watches simply keep track of our data, and the only way it's useful is if we do something with it ourselves.

How NVIDIA stands to benefit

NVIDIA isn't likely to make much money from Arm's using its open-source NVDLA, but that doesn't mean the chipmaker won't benefit. Having its deep-learning technology in potentially millions of devices could give the company an opening to sell more powerful deep-learning processing through the company's data centers. NVIDIA's data center revenue jumped more than 100% in the most recent quarter and now makes up about 20% of the company's total sales.

The company just introduced a powerful new deep-learning supercomputer that should help NVIDIA continue its dominance in the data center segment; the partnership with ARM is a smaller attempt to ensure that NVIDIA's deep-learning tech is in as many devices as possible.

Amazon, Microsoft, and Google already tap into NVIDIA's powerful deep-learning data centers for their cloud-based AI services. Other companies could do the same as more of their IoT devices collect data and need real-time decision-making processes. For now, though, investors should view this move as a way for NVIDIA to stay ahead of its rivals while the IoT evolves.