It's no secret that restaurants have been in a slump. Between the e-commerce-fueled migration away from malls, where many restaurants are located, to deteriorating industry dynamics driving people to cook at home, few players have been spared.

For a long time, Dave & Buster's (NASDAQ:PLAY) seemed above the trend. Its luck, however, seems to be running thin. After announcing in January that results would be lower than management had originally forecast, the company failed to live up to the lower standards in this week's release of fourth-quarter and FY 2017 results. 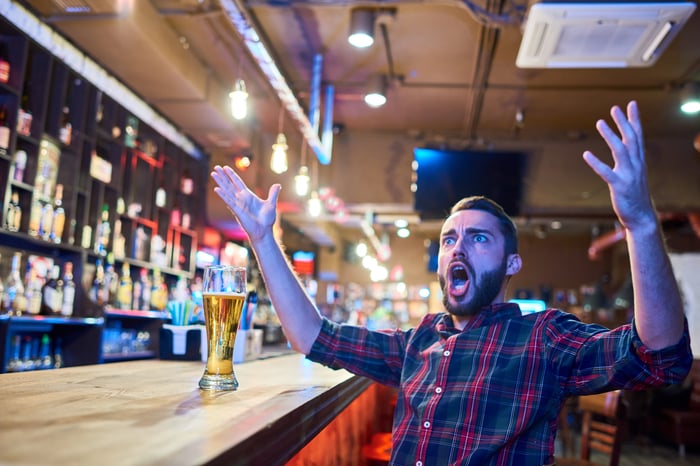 Before we dive into the details, let's take a look at the headline numbers for the company.

It's important to note, however, that these results aren't apples-to-apples. The company benefited from an extra week during the fourth quarter of the just-completed year. Without that benefit, revenue would have grown 5.5% and EBITDA would have actually shrunk slightly, down 1% from the same time last year.

The big story -- as is the case with any restaurant -- came from same-store sales. Here's a look at the trend the company has displayed over the last eight quarters. 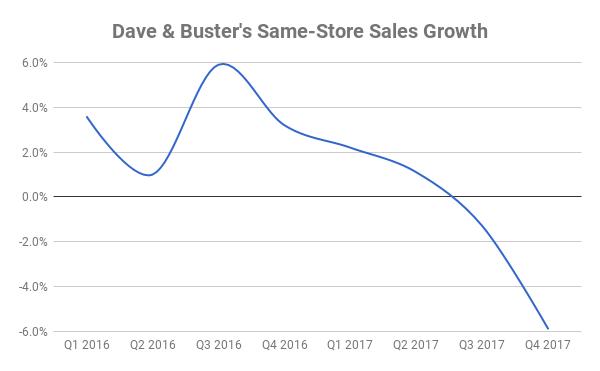 Concerning the 5.9% comps downturn in the just-reported quarter, there are four moving pieces to be aware of:

Management didn't shy away from acknowledging the tough quarter. Commenting in an press release on an "intense competitive environment," CEO Steve King said, "recent sales trends in our comparable stores have been disappointing..."

When Dave & Buster's was gaining traction, its amusement offerings set it apart from the rest of the field. But with the company's success has come imitation. In previous conference calls, the team has singled out Top Golf as an encroaching competitor, and Main Event Entertainment has also been moving into the company's territory with its bowling and dining concept.

On the back of that four-pronged approach at improvement, management sees the company opening 14 to 15 new stores in fiscal year 2018. Revenue is expected to grow 5% to 9% for the year, coming in at a midpoint of $1.22 billion, while net income is expected to decrease between 14% and 1%.

Editor's note: The free cash flow numbers in the table in this article have been corrected.