Here's a look at Conn's mixed results, management's comments, and what investors should remember about today's 13% decline.

Shares of Conn's, Inc. (CONN -8.17%), a specialty retailer selling consumer goods in the range of furniture, mattress products, appliances, electronics, and home office products -- it also has a credit business segment to provide solutions for constrained consumers -- are down 13% as of 11:13 a.m. EDT, after the company announced mixed fourth-quarter results and disappointing guidance.

"Conn's fiscal year 2018 financial results demonstrate the successful execution of the Company's turnaround strategies and, as expected, a return to full-year profitability. Credit segment performance improved throughout the fiscal year as a result of higher finance charges, stronger portfolio fundamentals, controlled expenses, and lower borrowing costs. Conn's retail segment ended the year with record retail gross margins. I am encouraged by the platform we have created and the positive momentum under way at Conn's," said Norm Miller, Conn's Chairman and chief executive officer, in a press release. 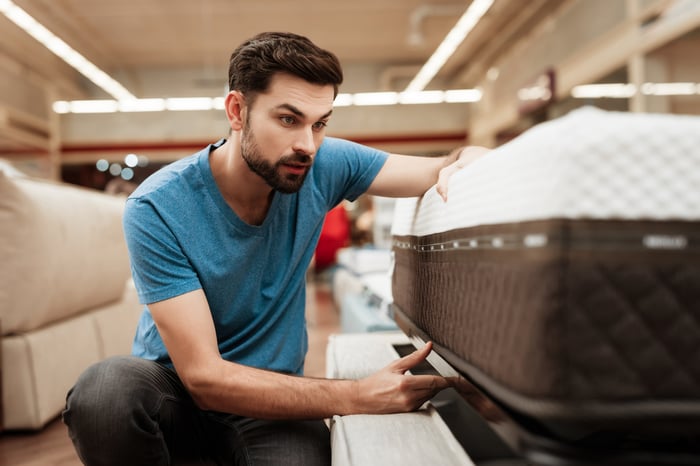 As Miller stated above, Conn's managed to post a net income of $3.2 billion, compared to last year's loss of $74,000, but there is a lot of work to be done on the turnaround. Same-store sales dropped 8% during the fourth quarter, steeper than expectations of a 5.3% drop. If the company can reverse its same-store sales declines while improving profitability, it will go a long way to improving quarterly results throughout 2018. Investors also have to keep in mind that shares of Conn's are up roughly 191% over the past 12 months and anything short of a blockbuster quarter could have weighed on shares today.