It's been just two days since Spotify (SPOT -0.22%) began trading publicly, and analyst ratings are starting to trickle in. The first major Wall Street pro to chime in was Gabelli's John Tinker, slapping a $130 price target on the shares. It's a problematic goal for a stock that opened at $165.90 on its first day of trading before settling lower, but Tinker thinks the valuation for the leading music-streaming subscription service is out of whack at current levels. He prefers Pandora (P) as a discounted way into the promising digital music niche.

Analysts were generally kinder to Spotify on Thursday, as Stifel and Canaccord checked in with buy ratings and price targets of $180 and $200, respectively. John Egbert at Stifel believes Spotify offers a compelling value proposition with its $9.99 a month premium service. He sees it reaching 159 million paying subscribers and 300 million monthly active users by 2021. Spotify begins this year with 71 million premium users and 157 million monthly active users, so Egbert's projections call for premium subscribers to more than double, with its total audience nearly doubling within the next four years. Egbert's long-term bullishness for Spotify is trumped by the near-term outlook for the stock from Maria Ripps at Canaccord with her $200 price target. 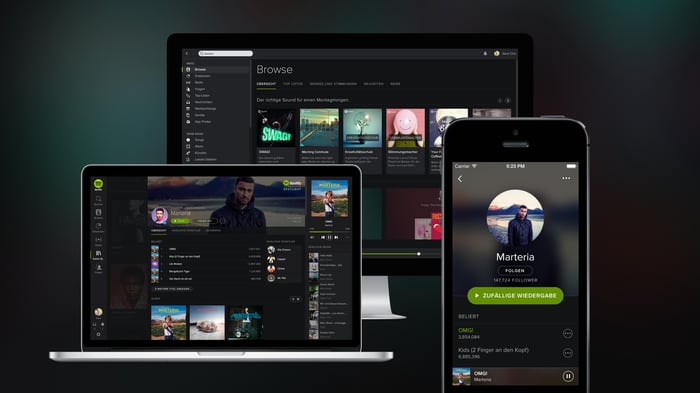 Ripps thinks that Spotify has legitimized the global digital music market. She feels that both Spotify and Pandora are at the right place at the right time as music consumption trends go digital. However, unlike Tinker, who recommends Pandora as the more attractively priced investment, Ripps believes that Spotify warrants a premium valuation given its niche strength and momentum.

Spotify is definitely growing. Revenue rose 52% in 2016, climbing 39% to hit $4.9 billion last year. Losses have been accelerating, but this is just the point in Spotify's growth trajectory where investing aggressively in marketing and content to set itself apart as the top dog matters. During this market-share-grab phase, Wall Street doesn't let red ink get in the way of a model that it thinks will be profitable in the long run.

The key to embracing Spotify -- and Pandora to a lesser extent -- is that they are making major headway in converting freeloaders into paying customers. It's not just Egbert at Stifel optimistically expecting premium-account growth to outpace gains in monthly active users come 2021. Spotify and Pandora are seeing premium users account for a larger percentage of their total audiences with every passing year. Spotify saw its paying subscribers soar 46% last year, compared to a more modest 28% climb in monthly active users. Pandora is also doing a better job of convincing its ad-based users pay up for a premium platform, though premium subscribers there account for just 7% of its active users. Spotify is getting 45% of its listeners to pay up.

Valuation concerns will dog Spotify, and the stock will be volatile. In just two days of trading, we've seen the stock trade as high as $169 and as low as $135. We're also going to see a wide range of analyst opinions, which isn't necessarily a bad thing.

Spotify choosing to offer its shares directly to investors through a direct public offering will mean we don't have a chorus of analysts putting out glowing yet hollow reports in a few weeks because they were underwriters in the deal. Spotify may wind up hitting both the $130 and $200 targets this year, and it wouldn't be a surprise if it happens in that order.