Recent volatility has pushed this yield to an attractive level.

Enterprise Products Partners (EPD -3.01%) has taken investors on a wild ride over the past few months. After sliding for much of 2017, units of the high-yielding master limited partnership (MLP) took off in December and had rebounded nearly 20% by mid-January. However, recent volatility in the stock market has erased almost all those gains, pushing its value down about 11% in the past year. That decline, along with a steadily increasing distribution, has driven its yield up to nearly 7% these days, which is above the 6% average yield it has traded around for the past few years. That's a tantalizing opportunity for income-seekers to scoop up this top-tier income stock at an attractive value.

A high yield without the risk

Enterprise Products Partners has some of the strongest financials in the MLP space. For starters, it boasts a top-notch balance sheet, backed by one of the top credit ratings in the sector and a leverage ratio that's below the peer group average. Further, the company has minimized its exposure to rising interest rates by steadily refinancing debt over the past few years so that its average maturity is more than 20 years away. 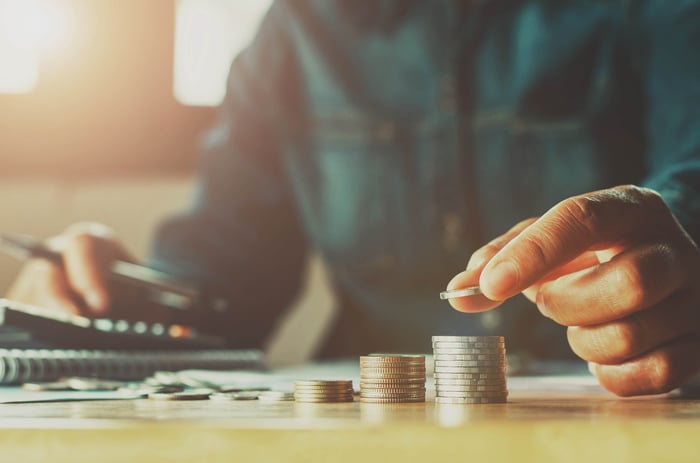 Enterprise compliments its strong balance sheet with a portfolio of steady cash-generating assets. Overall, 91% of the earnings from its pipelines, processing plants, and export terminals come from stable fee-based contracts. That predictable cash flow stream gives the company the money to pay its lucrative distribution. However, unlike many rivals that pay out virtually everything that comes in, Enterprise retains a growing portion of its cash to help finance expansion programs. The company took steps to further strengthen its financial situation by recently increasing its retention rate, making its current payout even safer, while providing it with more cash to fund growth projects and reduce its reliance on the volatile capital markets.

Enterprise Products Partners' investments to expand its energy infrastructure empire have yielded steady growth over the years. In fact, the company has increased its distribution to investors for 54 straight quarters and has raised the payout 63 times overall since going public nearly 20 years ago. That streak appears poised to continue in the coming years.

The company has been securing new projects about as quickly as it finishes them up. Its most recent was a 50-50 joint venture with Navigator Holdings (NVGS -4.64%) to build an ethylene export facility that should start up by early 2020. Ethylene, which is a widely used chemical and one of the building blocks of plastics, is in growing supply in the U.S. due to the shale boom. This project will link those supplies with Enterprise's growing ethylene logistics business -- which also includes a storage facility and pipeline system that are both currently under construction -- and Navigator Holdings' leading fleet of petrochemical gas carrying vessels to create a "floating pipeline" to world markets. Meanwhile, Enterprise should have plenty of expansion opportunities in the coming years given that the industry needs to invest about $26 billion per year through 2035 in building new energy infrastructure in North America, according to one study.

Enterprise Products Partners' recent sell-off pushed its yield up toward its highest level since the dark days of the oil market downturn in early 2016. While it's possible that the MLP's value could continue sliding in the near term, the company's long-term outlook is as bright as it has ever been thanks to its strengthening financials, an improving oil market, and the growth it has coming down the pipeline. That's why now looks like a tempting time to consider scooping up this top-tier income stock while it's on sale.