Stocks were in positive territory throughout the session Thursday, with the Dow Jones Industrial Average (DJINDICES:^DJI) and the S&P 500 (SNPINDEX:^GSPC) both posting significant gains.

As for individual stocks, LongFin Corp. (OTC:LFIN) had another wild day and Conn's (NASDAQ:CONN) sunk on disappointing sales. 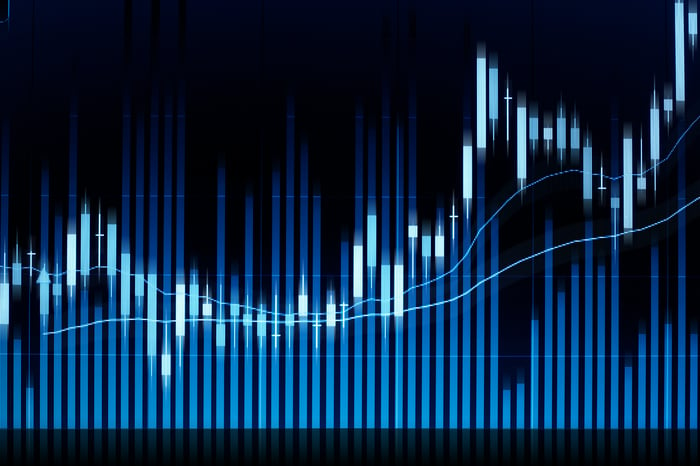 Yet another big swing for LongFin stock

Shares of controversial financial technology company Longfin soared 64.9% after the company's CEO went on CNBC to defend the company's practices and blame short-sellers for the recent plunge in stock price. In the interview, CEO Venkat Meenavalli said that he is fighting against $1.4 billion in short sales of the company's stock, and does not intend to sell any of his shares for three years.

The huge move in the stock price is just the latest episode in the saga of a company that short-seller Citron Research called a "pure stock scheme." LongFin debuted at $5 per share in December using a provision of the 2012 JOBS Act that allowed it to go public without the accounting and disclosure requirements larger companies have to follow. The stock soared as high as $142 a few days later when LongFin disclosed it had bought cryptocurrency website Ziddu.com, instantly associating itself with blockchain technology and the rabid investor attention it garners.

The company was added to the Russell 2000 Index last month, but things started unraveling for LongFin shareholders when FTSE Russell announced it was removing LongFin from the index because it had not met the float requirement. Then, LongFin filed its annual 10-K on Monday, saying it was under investigation by the Securities and Exchange Commission. The stock plummeted, losing 86% of its value since March 23.

There's not really a rational explanation for why this company with no credible business model is worth 65% more today than yesterday, but what seems likely is that we'll see plenty more wild swings ahead.

Specialty retailer Conn's reported fiscal fourth-quarter results that beat profit expectations but missed on sales, and the stock got pounded, falling 14.3%. Sales fell 2.9% to $420.4 million, compared with the analyst consensus of $428.7 million. Adjusted earnings per share came in at $0.56, beating expectations by $0.02.

Same-store sales dropped 8%, compared with a 7% decline last quarter, with the biggest contractions coming from consumer electronics and furniture and mattresses. All five product categories had unit volume declines, but increases in average selling price contributed to a record retail gross margin of 40.1%, compared with 38.9% in the quarter a year earlier.

Conn's specializes in selling to lower-income customers on credit, with the company financing approximately 71% of customer transactions through its in-house financing program. Contributing to the strong profit performance was a big improvement in credit spread, which was the highest in three years. Revenue from the credit segment increased 12.1%.

Looking forward, the company said it is expecting improving sales trends, with same-store sales falling between 3% and 5% for the current fiscal year, and continued widening of the credit spread.

Whereas the quarter had some positive signs for the business, analysts on the call questioned why the outlook for same store-sales growth wasn't any better. Conn's stock did well in 2017, but investors may need evidence of sales growth before it they're willing to resume bidding up the shares.