Shares of home alarm specialist ADT Inc (ADT -2.08%) popped more than 10% in early trading Thursday, and remain up 9.2% as of 2 p.m. EDT, after receiving positive mention from analysts at investment bank Morgan Stanley this morning.

Morgan Stanley was already optimistic about ADT shares, having rated the recent IPO -- which Morgan Stanley underwrote -- "outperform." Yesterday, the banker quality-checked that assumption in a meeting with management at ADT, and today published a note on its findings.

According to Morgan Stanley's report, reviewed by TheFly.com this morning, "ADT's service offering is differentiated from the product offerings of newer entrants." What's more, this differentiation is helping ADT to produce "steady operating growth" and "accelerating cash flow," says TheFly.

On top of all that, the analyst finds ADT to offer investors a "very compelling valuation." 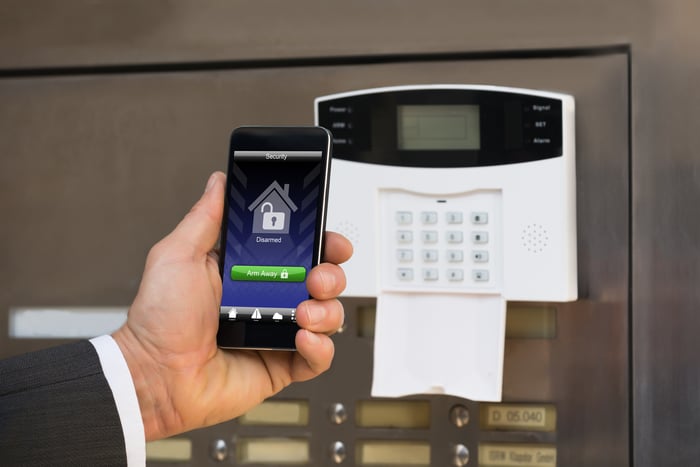 How "compelling" is the valuation? Currently priced at just $8.54 per share, Morgan Stanley says it thinks ADT stock could fetch as much as $15 a share within a year -- about a 75% return for new investors.

But is that realistic? I mean, sure, there was a time when Morgan Stanley hoped ADT would sell for even more than $15 a share at its IPO. And today, the stock doesn't look too unfairly priced at about 17 times earnings, with a 15% projected growth rate.

Still, there's a big difference between arguing that 17 times earnings is a fair price to pay for ADT -- and arguing it's "compellingly" cheap. Absent proof the stock can grow earnings a whole lot faster than most folks on Wall Street believe it can, I'm more inclined to call the stock fairly priced than cheap.

Can ADT Make Collaborators Out of Its Competition?

Debt Becomes a Major Drag on Earnings for ADT