Shares of apparel retailer Duluth Holdings Inc. (NASDAQ:DLTH) moved higher last month gaining 11%, according to data from S&P Global Market Intelligence, as it released its fourth-quarter earnings report. The stock seemed to gain in anticipation of the report though it actually fell on the results, but then recovered those losses over the duration of the month.

The chart below tells the tale, as you can see the dip on the earnings report. 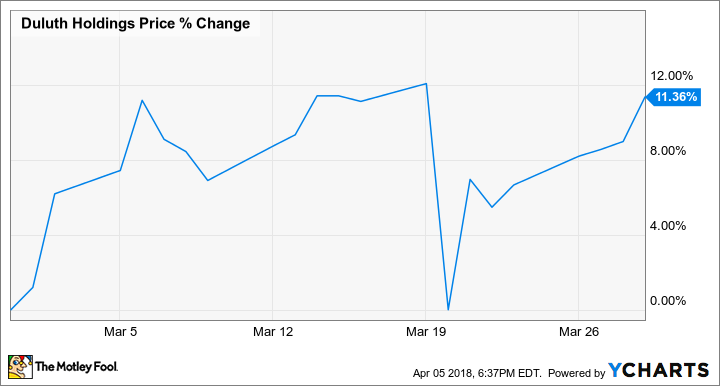 Duluth shares rose in the first half of the month on little news, though investors may have been anticipating the earnings report later in the month. Retail stocks rose broadly over the holiday season in response to reports that traffic and sales were up, and the parent of Duluth Trading Co. figured to benefit from the trend, as well.

When it finally reported earnings, the retail chain posted solid numbers as revenue increased 24.7%, to $217.8 million, easily beating estimates at $210 million. However, gross margin fell 210 basis points, to 53.3%, due to an increase in promotional days and flash sales, as well as a decrease in shipping revenues. Adjusted earnings per share increased from $0.43 to $0.55, beating the consensus by $0.01.

Despite beating estimates, the stock fell 11% on the report as investors were disappointed with Duluth's guidance for 2018. However, following that initial reaction, the stock quickly bounced back as investors took advantage of the sell-off on an otherwise strong round of results.

The workwear purveyor is accelerating the opening of brick-and-mortar stores but remains a predominantly e-commerce operation, giving it an advantage over other retailers. While investors may be disappointed by the weaker-than-expected guidance, Duluth looks like it's building a solid foundation for long-term growth.