Please ensure Javascript is enabled for purposes of website accessibility
Log In Help Join The Motley Fool
Free Article Join Over 1 Million Premium Members And Get More In-Depth Stock Guidance and Research
By Keith Speights – Apr 6, 2018 at 8:18AM

Which stock wins in a matchup between a long-time oncology leader and an up-and-coming cancer biotech?

So far, 2018 is turning out to be a disappointing year for big pharma company Novartis AG (NVS -1.47%). Its stock is down a little year to date, although general market anxiety appears to be the primary culprit. But for Exelixis, Inc. (EXEL -1.75%), disappointing is too mild of a word. The biotech stock has dropped more than 20%, with most of the decline coming after Exelixis reported Q4 results that didn't meet investors' expectations.

But the future is more important for investors than the past. Which of these stocks is now the better buy? Here's how Exelixis and Novartis compare. 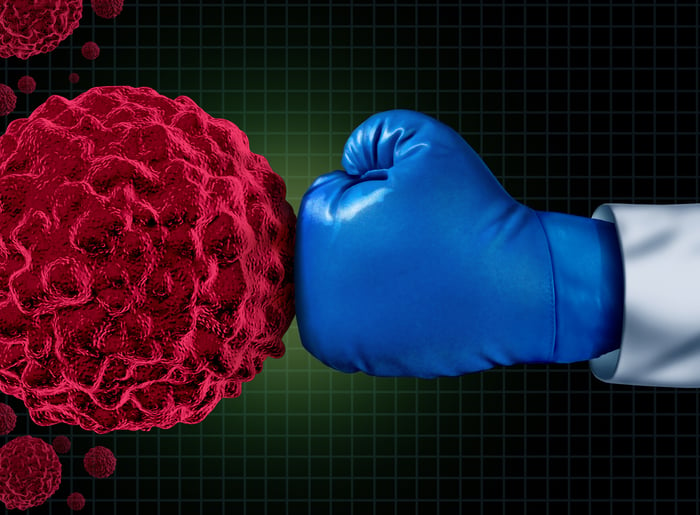 There's one overriding reason why investors would want to buy Exelixis stock: growth. Wall Street analysts project that the biotech will grow its earnings by more than 40% annually over the next five years. That kind of growth actually makes Exelixis' current share price almost look like a bargain.

But can Exelixis really pull off that kind of sizzling growth? Don't rule it out. Sales for the company's cabozantinib franchise, which includes Cabometyx and Cometriq, soared 158% in 2017 compared to the prior year. For most of last year, though, Cabometyx was on the market only for treating second-line and later renal cell carcinoma (RCC).

On Dec. 19, 2017, the Food and Drug Administration approved Cabometyx as a first-line treatment for RCC. This opened up a tremendous new market for the drug. Another significant opportunity could be on the way. Exelixis has submitted Cabometyx for U.S. approval as a second-line treatment for advanced hepatocellular carcinoma (HCC), the most common form of liver cancer. The company's partner, Ipsen, is also seeking European approval for Cabometyx in the indication.

Speaking of combo therapies, Roche has a late-stage study in progress testing a combination of Tecentriq and Exelixis' MEK inhibitor Cotellic in treating BRAF wild-type melanoma. Roche also expects to announce top-line results within the next few months from another phase 3 study of the two drugs targeting treatment of colorectal cancer.

Thanks to the cash stockpile Exelixis has built with strong Cabometyx sales, the company has begun investing in rebuilding its pipeline. More deals are likely to be on the way. With these efforts combined with excellent opportunities for Cabometyx in additional indications, Exelixis just might be a gold mine for growth investors.

Novartis isn't likely to enjoy the kind of growth that Exelixis will. However, the big drugmaker offers several other benefits for investors.

The company's dividend ranks near the top of the list. Novartis' dividend currently yields 3.66%. With the big pharma company's solid free cash flow, the dividend appears to be pretty safe.

There's also something to be said for Novartis' diversification. Most of Exelixis' fortunes hinge on one drug -- Cabometyx. Novartis, on the other hand, claims nine blockbuster drugs with several more knocking on the the door of the $1 billion annual sales mark. No single drug in Novartis' lineup accounts for more than 7% of total revenue. In addition to its pharmaceuticals business, the company is a leader in generic drugs, biosimilars, and vision care products.

While Exelixis almost looks like a bargain, Novartis could justifiably be categorized as one. Its stock currently trades at only 14 times expected earnings.

Novartis' growth could slow down a bit over the next few years as a result of generic competition for leukemia drug Gleevec and generic rivals potentially on the way for multiple sclerosis drug Gilenya. However, the company still has several growth drivers, including immunology drug Cosentyx and its oncology lineup.

Also, Novartis doesn't face the prospect of rebuilding its pipeline as Exelixis does. The big drugmaker has over two dozen late-stage programs, most of which could be submitted for regulatory approval within the next two years.

This might sound like a cop-out, but the better buy between these two stocks depends on what kind of investor you are. If you're looking for income, Novartis is certainly the smarter choice. On the other hand, if growth is more important to you, Exelixis will probably be more to your liking.

I'm geared more toward growth, so my pick would be Exelixis. The biotech does face risks that rival drugs could beat Cabometyx in the marketplace. And any pipeline setbacks would hurt Exelixis much worse than they would Novartis. Still, I like the prospects for Cabometyx and view Exelixis as a solid growth stock.