Please ensure Javascript is enabled for purposes of website accessibility
Log In Help Join The Motley Fool
Free Article Join Over 1 Million Premium Members And Get More In-Depth Stock Guidance and Research
By Keith Speights – Apr 6, 2018 at 8:19AM

These two biotechs are beating the market so far in 2018. But which is the better pick?

For every yin, there's a yang.

While most stocks roared last year, those of Intrexon Corporation (PGEN 3.42%) and Inovio Pharmaceuticals Inc. (INO 2.68%) plunged by 52% and 40%, respectively. So far in 2018, however, both companies are performing well, while many other stocks are struggling.

What's fueling the recent momentum for these biotechs? And which is the better pick for investors now? Here's how Intrexon and Inovio stack up against each other. 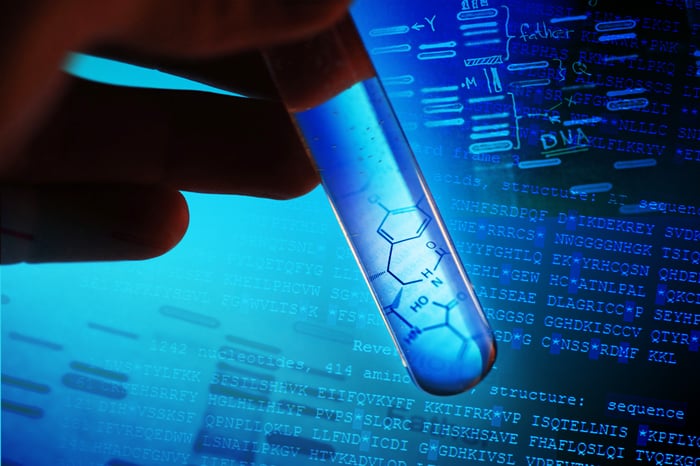 The case for Intrexon

If biotechnology is involved in any way in a market, there's a pretty good chance that Intrexon is involved, too. The company has a methane bioconversion platform for generating energy. One of Intrexon's subsidiaries genetically engineered apples that don't brown. Another subsidiary focuses on the use of genetics in livestock breeding. Intrexon's Oxitec business uses genetic engineering to control insects that spread disease and damage crops. And that's just a start.

CAR-T holds tremendous potential in treating several types of cancer. However, the therapy is very expensive, and treatment can be delayed because of the need for off-premises processing of genetically engineered T cells. Intrexon has a non-viral approach to CAR-T that the company believes will allow treatment to be delivered at the point of care at much lower cost than other CAR-T therapies.

The most advanced use of Intrexon's gene-therapy technology, though, comes from a key partner. Ziopharm Oncology plans to initiate a pivotal late-stage study in the second half of this year evaluating gene therapy Ad-RTS-hIL-12 in treating recurrent glioblastoma.

Although Intrexon remains unprofitable at this point, the company's revenue is growing nicely. In March, Intrexon reported that 2017 Q4 revenue increased 67% year over year, to $77 million. The biotech also had positive adjusted EBITDA of $13.7 million.

Inovio is a clinical-stage biotech with three promising mid-stage or late-stage candidates. The company is evaluating immunotherapy VGX-3100 in a phase 3 study for treating cervical dysplasia, a precancerous condition caused by human papillomavirus (HPV). Initial results from this study should be available in late 2019.

Positive results from the late-stage study of VGX-3100 could bode well for another of Inovio's pipeline candidates. INO-3112 combines VGX-3100 and a DNA-based immune activator encoded for IL-12, a protein produced by white blood cells for regulating immune responses. AstraZeneca's MedImmune subsidiary acquired the rights to the drug, renaming it MEDI0457. AstraZeneca is testing MEDI0457 in phase 2 studies targeting treatment of head and neck cancer and cervical cancer.

Inovio's other candidate, INO-5401, attracted the attention of two other large companies. Regeneron Pharmaceuticals and Inovio signed an agreement last year to test INO-5401 in combination with Regeneron's PD-1 inhibitor REGN2810 in treating newly diagnosed glioblastoma multiforme. Roche also is collaborating with Inovio on a phase 2 study of a combo of Tecentriq and INO-5401 in treating bladder cancer.

Inovio's infectious-disease program has generated the most buzz for the biotech in recent years, though. The company is testing an experimental Zika virus vaccine in early-stage studies with partner GeneOne Lifesciences. The company saw its stock soar, at least temporarily, in January after announcing promising preclinical data for an experimental flu vaccine. Inovio also is developing vaccines for Ebola, HIV, and MERS (Middle East respiratory syndrome).

While Inovio has plenty of irons in the fire, its financial results aren't so hot. The company's sole sources of revenue right now are from collaborations and research grants.

Both of these stocks could be big winners over the long run if their pipeline candidates are successful. Both companies have cash stockpiles that should sustain them well into 2019, although Inovio and Intrexon likely will have to generate more cash through stock offerings or debt in the future.

Choosing between the two biotechs is tough because neither is assured of success. If I had to make a decision, though, I'd go with Inovio. Its market cap is smaller, so the stock should have more room to run on positive catalysts.

Having said that, I don't recommend either of these stocks, and I wouldn't personally buy either one of them right now. There are too many risks. And there are too many other stocks to buy that look more attractive.