President Donald Trump renewed his tweet attacks on the e-commerce giant, but that strategy could ultimately backfire.

Shares of e-commerce provider Amazon.com (AMZN -3.01%) fell last week when Axios reported that President Donald Trump wanted to "go after" the online seller, and that he was "obsessed" with the company. That slump continued early this week after Trump renewed his criticisms of Amazon in a tweetstorm over the weekend blaming the company for the woes of the U.S. Postal Service.

The president claimed the agency was losing $1.50 on each package it delivers for Amazon, demanding that the company "must pay real costs (and taxes) now!" Trump believes that increasing the rates charged on parcels could raise Amazon's shipping costs by as much as $2.6 billion, though he didn't provide accounting for those claims.

Trump's very public war of words against the e-commerce behemoth could have unintended consequences for the postal service, as well as other large shippers like FedEx (FDX -3.37%) and United Parcel Service (UPS -2.10%). 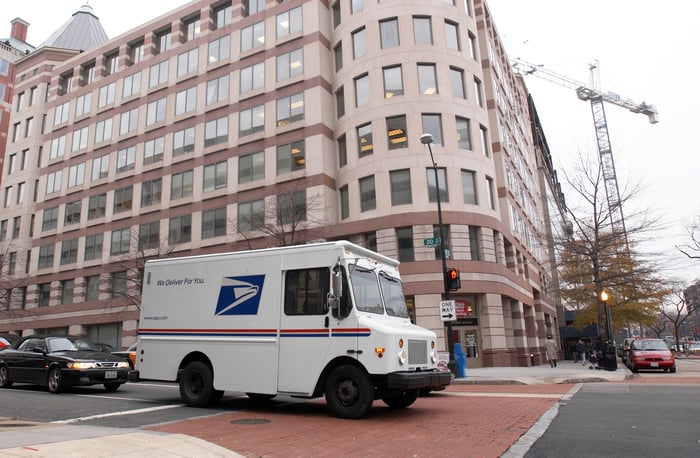 A history of acrimony

It's important to note that this isn't the first time the President has tweeted his ire regarding the postal service. Late last year, Trump tweeted:

Why is the United States Post Office, which is losing many billions of dollars a year, while charging Amazon and others so little to deliver their packages, making Amazon richer and the Post Office dumber and poorer? Should be charging MUCH MORE!

The U.S. Postal Service has unfortunately been besieged by declines in first-class letters and advertising mail, and double-digit revenue increases in package delivery haven't been enough to offset those declines. Additionally, spiraling healthcare and pension costs have added to the agency's woes.

Amazon, meanwhile, has been building out its logistics network for years and many people believe that the company has ambitious plans to eventually handle the bulk of its package delivery, in a move that could challenge FedEx, UPS, and the Postal Service. Any move by the post office to increase package rates could give Amazon a financial incentive to accelerate those plans, which could spell trouble for the post office and Amazon's other delivery partners.

By land, sea, or air

The company has already purchased thousands of Amazon-branded truck trailers to augment shipping capacity by moving packages between its warehouses, fulfillment centers, and sorting centers. Amazon also bought French package delivery company Colis Prive in early 2016, as well as the rights to buy a stake in UK package delivery company Yodel. There were even reports last year that The Home Depot was considering a $9 billion acquisition of XPO Logistics, a company that specializes in the home delivery of heavy items like appliances and furniture -- just to keep Amazon from getting it. 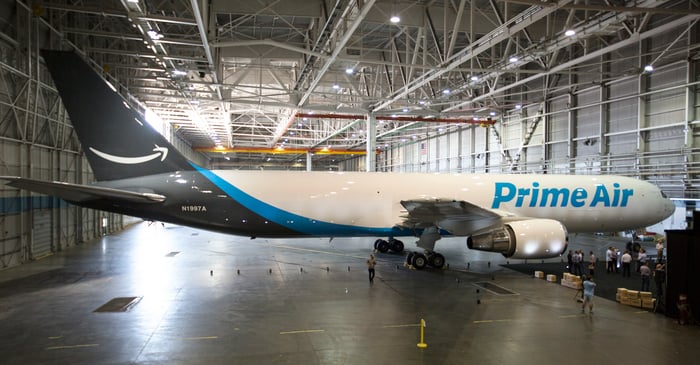 Amazon has been increasing its logistics capabilities. Image source: Amazon.

In late 2016, the company began leasing planes that it branded Prime Air, and had plans for a fleet of as many of 40 aircraft to meet peak demand and give the company flexibility the rest of the time. Early last year it was revealed that the company was building a dedicated air cargo hub in Northern Kentucky that would house the planes and employ 2,000 people to help ship packages between Amazon's warehouses.

Early last year, Amazon expanded into ocean freight, handling the shipment of goods from Chinese merchants to its U.S. warehouses. While the company did not own or operate any of the ships, it further expanded its logistics role, one that was previously filled by global freight companies.

Amazon's CEO Jeff Bezos famously said, "Your margin is my opportunity," and shipping is likely no different. In 2017, the company spent over $25 billion on fulfillment -- a full 15% of its operating expenses -- and a 43% increase over 2016.

Any opportunity to reduce those costs would be embraced by Amazon. While its competitors and many analysts believe Amazon's delivery network is only meant to complement those of its shipping partners, rather than replace them, Bezos has shown that he plays the long game and any market is fair game. Two decades ago, very few people could have foreseen the powerhouse that Amazon has become.

Meanwhile, President Trump's public war of words and threats to increase shipping costs could spur Amazon to further its ambitions in the package delivery space, even more quickly than it may have originally planned.