Marijuana stocks are risky -- you probably hear it all the time. And the biggest risk of all is the potential "epic glut" resulting from marijuana growers cranking out more supply than the market will demand.

If you remember anything from your high school or college economics classes, it's probably the supply and demand curves that show how the price of any product drops dramatically as supply exceeds demand. A substantial glut of marijuana would mean that prices will plunge. That's a scary proposition for investors who have already bought or are considering buying marijuana stocks.

But there's a good reason why investors in marijuana stocks shouldn't be afraid -- at least not yet. 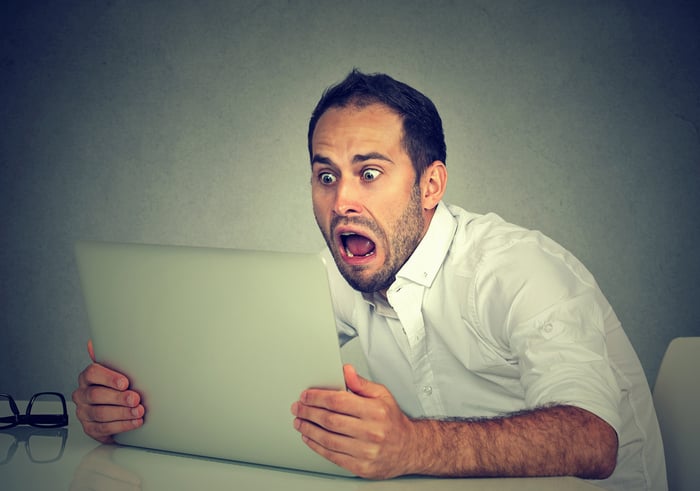 It does seem inevitable that a supply glut in the Canadian marijuana market is on the way. Just look at the projected annual production capacity for the five largest marijuana growers in Canada by market cap: Canopy Growth (NASDAQ:CGC), Aurora Cannabis (NASDAQ:ACB), Aphria (NASDAQOTH: APHQF), MedReleaf (NASDAQOTH: MEDFF), and Cronos Group (NASDAQ:CRON). 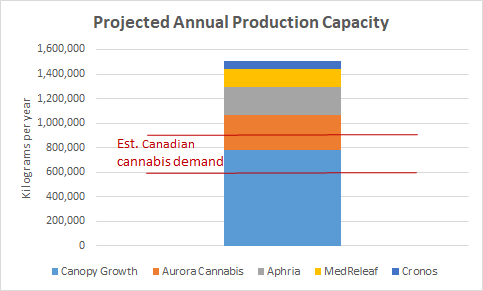 These top five marijuana growers combined should produce a little over 1.5 million kilograms of cannabis on an annual basis within the next couple of years. The potentially bad news: That amount is much higher than projections for demand for both medical marijuana and recreational marijuana, assuming that everything stays on track for legalization of recreational marijuana in Canada.

Even if we use the highest of these projections, though, the anticipated production capacity of the top five marijuana growers will far outstrip demand in the Canadian market. And we haven't even factored in additional capacity from smaller marijuana growers.

Granted, it will be a year or two before some of the companies reach their projected capacity targets. However, that's little comfort for investors in marijuana stocks.

Marijuana investors can take comfort in something else, though. While the picture you saw above is certainly scary, there's also a bigger picture to consider. 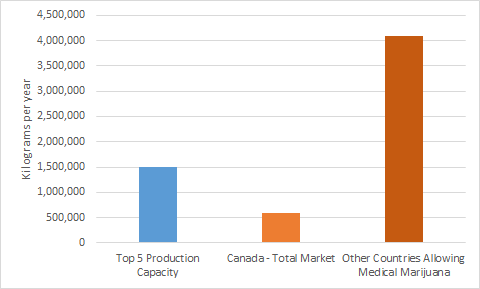 Let's examine what the chart above shows. As mentioned earlier, the combined production capacity of the top five Canadian marijuana growers is a little over 1.5 million kilograms per year. The low end of estimates for the Canadian cannabis market is 600,000 kilograms per year. However, the potential market demand in countries that already have laws in place allowing medical marijuana dwarfs the production capacity of the biggest Canadian marijuana growers.

Aurora Cannabis analyzed the potential market sizes in 22 countries that have active medical cannabis laws. Based on the populations of these countries, the total implied demand (excluding Canada) is over 4 million kilograms per year. One of the largest markets is Germany, which is why Aurora, Canopy Growth, and others have made strategic acquisitions and partnerships to establish a presence in the German market.

When these other countries are factored into the equation, the combined projected capacity for the top five Canadian marijuana growers is less than one-third of the potential global cannabis market demand. But, as they say on the TV infomercials, wait -- there's more.

At least 14 additional countries either have pending laws to allow use of medical cannabis or could potentially legalize medical cannabis in the not-too-distant future. These countries represent another potential 3.8 million kilograms per year annually. By the way, the biggest potential market of all -- the U.S. -- isn't included in that total.

So marijuana stock investors don't have anything to be afraid about after all, right? Not so fast.

It's entirely possible that there will be periods where supply is greater than demand. Market forces don't necessarily operate in a nice, linear fashion. Marijuana growers could ramp up capacity faster than demand increases in some of the countries that allow medical marijuana.

Also, there are still several hurdles to be jumped for recreational marijuana to be legalized in Canada. A bill to legalize recreational use cleared a key Senate vote a couple of weeks ago to go to committee review, but there could be some political drama in store.

The prospects of that "epic glut" shouldn't be nearly as scary as they could be. But there are still risks for marijuana investors to keep in mind. A little fear can be a good thing.