Tencent (OTC:TCEHY) recently surpassed one billion users in its popular and highly capable app, WeChat. The exponential growth of WeChat, which reached the billion-user milestone even faster than Facebook (NASDAQ:FB), has been justifiably celebrated. After all, it's about more than users: The social media hub is most impressive when it comes to user engagement, with one-third of users spending more than four hours per day on the app.

Four hours a day is a serious commitment -- it's clear WeChat has succeeded in attracting and engaging users. But the question remains: How will it monetize them?

The lazy answer is advertising. Many analysts are pointing to Facebook as an ideal business model to emulate, but that path is full of pitfalls. 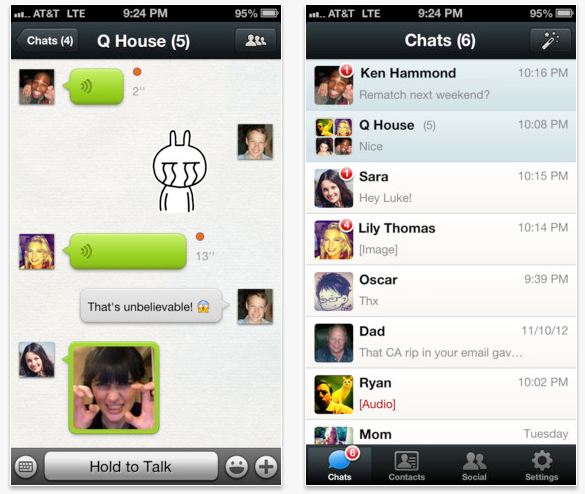 First, consider the opportunity WeChat has to generate revenue from its one billion users. If Facebook is a fitting comparison, WeChat is leaving a lot of money on the table.

There are no shades of grey there. That shortfall paints a stark contrast between these two social media titans. Investors looking for a ramp up in revenue per user will continue to beg the company to "Turn on the spigot!" For comparison, WeChat reportedly shows only one ad per day in its "Moments" feed versus Facebook's average of one ad every ten posts.

As a result, there is some debate over whether WeChat's management team is being too cautious, fearing that they could taint the user experience by splashing ads across user feeds. That certainly appears to be the case at the moment. However, their reasoning could be very well justified.

Two factors that are overlooked in making the ad boost argument are Tencent's history and a unique Chinese culture. These two things, in fact, go hand-in-hand.

Tencent has never been quick to pull the lever. Since day one, it has spent more energy thinking through its customers' needs and desires in order to offer better features before converting them to premium paying users. Advertising has never been a holy grail to aspire toward. Here's how Tencent's chief exploration officer, David Wallerstein, put it in an interview with start-up incubator Y Combinator about the very early days of the company:

The ad market from our perspective has always been pretty challenging in China compared to the US. And particularly for us we found our users did not like ads in their messaging experience. So they would go through great lengths to develop software and these kind of hacks so they wouldn't have to see the ads. And we felt like that was kind of endangering the user experience. So we did always have an ad team, and we're getting much better at it. And we have different kinds of inventory today. But the ads in the messaging window was never a viable option for us, unlike our friends at Google or other companies.

Out of necessity, then, Tencent has ben very reluctant to increase the prevalence of ads on its platform. It's partly a user experience decision, but it's mainly a unique consideration for the Chinese market. They're likely concerned about the privacy of their user habits in a way that's different than other countries. So as ads increase, users disengage or find a workaround, but they won't sit back and tolerate them.

To recap, Tencent has historically favored making money from its users by offering them premium versions of its software. This started way back with its desktop messaging app QQ in 1999, and it continues with WeChat. Facebook, on the other hand, has always been free for individuals to use its plethora of functions, including everything from its newsfeed and messaging to groups features, just to name a few.

But there have always been questions about the sustainability of the Facebook model. In 2010, Newsweek published an article called "The Secret Cost of Using Facebook" that highlighted privacy concerns. That drumbeat has only increased in the wake of the most recent headlines and controversy. My colleague Jeremy Bowman expects it will blow over with users. Perhaps ... but it's a point of contention that's already led to Facebook reducing the use of data brokers to increase ad effectiveness.

In any case, the point is not whether it's worked for Facebook. To date, advertising has been a cash cow. But there's good reason to believe that may not be the case for Tencent.

The price of Tencent shares -- at more than 50 times earnings -- suggests that the market expects WeChat to become the revenue giant that Facebook is. Analysts see it as an inevitable "advertising powerhouse" in the making.

Tencent's historical strategy, however, tells us this is far from certain. Second, its Chinese users are less tolerant of ads. And third, Facebook's latest predicament shows that failing to aligning user interests with a revenue stream can be costly -- to the tune of $50 billion lopped off Facebook's market cap this month.

Advertising revenue is likely to disappoint the market's expectations. Short-term investors might get burned, but an alternative business model will likely prove favorable for Tencent and its long-term shareholders alike.