Since then, Pratt & Whitney's revolutionary geared turbofan engine has suffered from numerous technical glitches, slowing production and forcing some operators to take aircraft out of service. This has created an opening for rival engine maker CFM International to gain market share. Nevertheless, JetBlue recently agreed to buy another large batch of Pratt & Whitney engines from United Technologies and signed a long-term maintenance contract with the company.

While JetBlue initially ordered 40 A320neos, it has gradually expanded its order book for Airbus' next-generation narrowbody aircraft. (JetBlue has also shifted the mix of its orders toward the larger A321neo model.) By the end of 2017, the carrier had 60 A321neos on order, along with 25 A320neos. 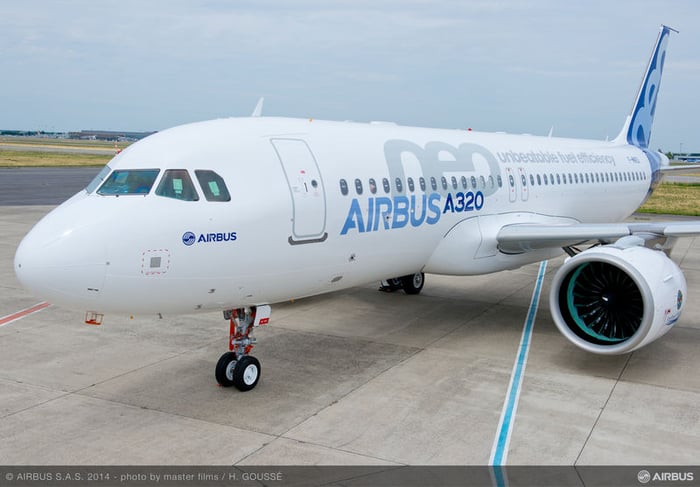 However, until recently, JetBlue hadn't made an engine selection for any of the 45 incremental A320neo-family aircraft that it had ordered. These airplanes are set to arrive between 2021 and 2024. The carrier has strategically held off on committing to engines for those planes as it began to consider more significant changes to its fleet.

Last Thursday, JetBlue announced that it had decided to stick with Pratt & Whitney engines for the rest of its Airbus order book. JetBlue ordered an additional 97 engines -- including six spares -- and also signed a 15-year maintenance contract with the United Technologies subsidiary.

JetBlue's A320neo engine selection decision has been wrapped up in a broader structural cost reduction program. JetBlue hopes to save $250 million to $300 million on an annualized basis by 2020, with aircraft maintenance generating up to $125 million of annual savings.

At an investor conference earlier this year, CFO Steve Priest described a "once in a 20-year opportunity" for JetBlue to reduce its maintenance costs.

First, it was dangling the order for nearly 100 additional engines (and associated maintenance) in front of Pratt & Whitney and CFM, which are competing aggressively right now. Second, JetBlue was looking to sign a long-term maintenance contract for more than 400 current-generation engines for its A320/A321 fleet. Third, JetBlue has been considering a new order for smaller aircraft to replace its E190s, which would entail buying more engines and signing another long-term maintenance contract.

In other words, JetBlue entered 2018 ready to hand out a lot of business to engine manufacturers and maintenance organizations. The company's goal was to take advantage of its newfound scale to achieve a long-term reduction in its maintenance costs. After all, JetBlue was a small carrier with very little purchasing power when its original maintenance deals were signed.

Pratt & Whitney always had the inside track

Nobody should have been surprised that JetBlue picked Pratt & Whitney for its recent engine order and long-term maintenance contract. Operating A320neo subfleets with different engine types would have added unnecessary complexity to JetBlue's operations. Additionally, the V2500 engines on JetBlue's current-generation Airbus fleet are manufactured by a consortium led by Pratt & Whitney. Finally, the CSeries and E2-series jets that JetBlue is considering to replace its E190 fleet are both powered by Pratt & Whitney geared turbofan engines.

It still made sense to run a competition for the engine selection, to ensure that JetBlue would get the best possible deal. JetBlue has become a major customer for the United Technologies unit, so Pratt & Whitney had ample incentive to offer favorable pricing in order to win the competition.

Reliability concerns surrounding the new geared turbofan engines were the only major threat to Pratt & Whitney winning the JetBlue deal. However, JetBlue has wisely deferred its A320neo family deliveries to 2019 and beyond, giving Pratt & Whitney as much time as possible to fix any remaining glitches.

Pratt & Whitney has reassured JetBlue's management that the worst is past in terms of reliability issues. Furthermore, the engine maker probably assumes most of the risk of future problems due to the long-term nature of the maintenance contract. Thus, going all-in on Pratt & Whitney engines was the best way for JetBlue to achieve its long-term cost reduction goals.