Shares of the Chinese e-commerce company sold off after a weaker-than-expected earnings report.

Shares of JD.com, Inc. (JD -1.85%) headed south last month after the Chinese e-commerce company missed the mark on some key metrics in its fourth-quarter earnings report. As a result, the stock finished March down 14%, according to data from S&P Global Market Intelligence. As you can see in the chart below, shares fell sharply at the beginning of the month after the earnings release, and remained volatile for the rest of March: 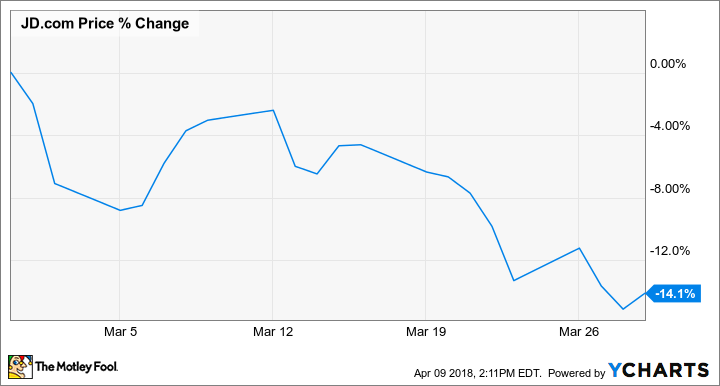 JD.com, the #2 Chinese e-commerce operator behind Alibaba, showed off another round of strong growth. Revenue was up 38.7% to $16.9 billion, but that came up a bit short of analyst estimates of $17.1 billion. Adjusted earnings per share, meanwhile, slipped from $0.09 to $0.05, missing expectations of $0.07.

CEO Richard Liu said: "Our unmatched online shopping experience continued to reshape Chinese e-commerce, win over consumers and drive robust growth in 2017. As we implement our vision of 'boundaryless retail,' we are working with top industry players to build China's most advanced and comprehensive retail ecosystem to reach consumers wherever and whenever they shop."

However, with the earnings and revenue misses, the stock still sold off 5.2% on the report. The stock recovered most of those losses by the end of the next week, but fell later in the month on news that Alibaba was preparing to launch its own listing in mainland China, which could give additional firepower to JD.com's chief rival.

With investments from Tencent and Walmart and impressive growth, JD.com is no slouch despite Alibaba's much larger size. China's e-commerce market is big enough to support more than one winner, and JD.com shares are still up 27% over the last year, indicating a broader upward trend. JD.com has also been gaining share on Alibaba, and is planning to expand into Europe and the U.S. While last month's sell-off was disappointing, investors shouldn't lose track of the bigger picture.