The RV maker fell on a weak report from a peer despite its own strong numbers.

Shares of Thor Industries (THO 1.57%) headed lower last month in spite of the RV maker posting a solid second-quarter earnings report. Concerns that the stock was overheated, as well as a disappointing report from riva Winnebago Industries (WGO 0.07%), seemed to pressure shares downward. According to data from S&P Global Market Intelligence, Thor finished March down 11%. 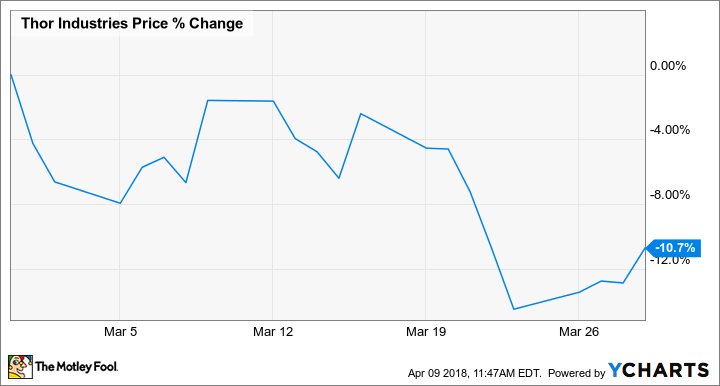 THO data by YCharts.

Thor actually beat estimates in its March 7 earnings report as net sales jumped 24.1% to $1.97 billion, topping estimates of $1.91 billion; on the bottom line, adjusted earnings per share improved from $1.23 to $1.92, ahead of the consensus of $1.82. The Airstream parent said its RV backlog increased 33.9% from a year ago to $2.8 billion, due to "continued strong consumer demand for affordably priced travel trailers and motorhomes."

The stock sold off modestly following the report, dropping 1.7%, but quickly bounced back on an upgrade as Aegis Capital lifted its rating to buy and Stifel also upped its price target by $10 to $142. Stifel was particularly impressed by the strong growth in Thor's backlog.

However, the stock plunged 10% over a three-day period starting on March 21, after peer Winnebago missed earnings estimates in its quarterly report. Despite strong growth from its towables segment, Winnebago's adjusted per-share profit of $0.62, up from $0.48 a year ago, missed estimates of $0.65.

Both Thor and Winnebago stocks have fallen since the beginning of the year after surging last year; investors may now believe the space is overheated. The recreational vehicle industry is highly cyclical, and both companies seem to be benefiting from a booming economy, moderate gas prices, and interest among both baby boomers and millennials. While the recent growth won't continue forever, I'd tend to agree with Stifel and Aegis that Thor looks like a solid bet.