Electric-car maker Tesla (TSLA 1.72%) says it won't need to raise any more capital this year. Earlier this month, the company announced that it had produced nearly 10,000 Model 3 vehicles during the quarter, including over 2,000 units in the seven days preceding the announcement. That's progress, but still below the 2,500-per-week production rate that Tesla had been targeting. It was also a result of engineering chief Doug Fields urging his team to push harder in order to "prove a bunch of haters wrong."

Tesla is standing by its other target of producing 5,000 Model 3 vehicles per week by the end of the second quarter, which should yield "strong positive" operating cash flow. "As a result, Tesla does not require an equity or debt raise this year, apart from standard credit lines," Tesla said at the time.

Goldman's not buying it

Goldman Sachs has put out a research note this morning reiterating a sell rating while reducing the firm's price target on Tesla shares from $205 to $195, CNBC reports.

Analyst David Tamberrino questions the sustainability of Model 3 production rates. It's one thing if Tesla can consistently produce Model 3 vehicles in volume, but another if the production rate is merely a superficial accomplishment driven by a short-term internal push. Tamberrino believes that the "sustainable production rate" for Model 3 in the second quarter will be below 2,000 per week, potentially in the ballpark of 1,400 per week. 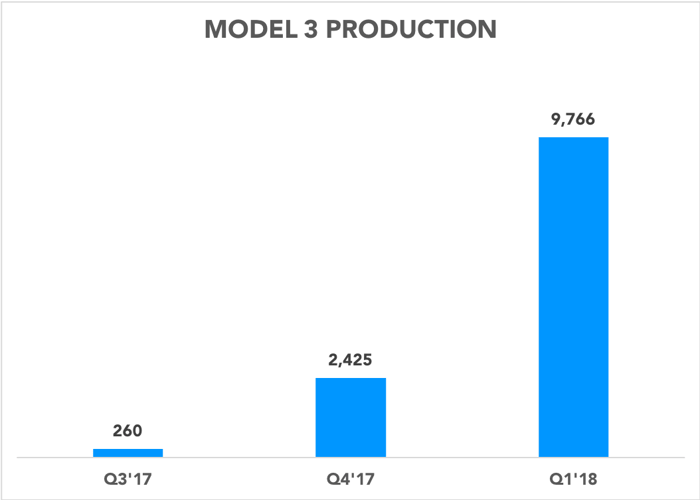 Tamberrino's prediction that Tesla will need to tap capital markets as early as the third quarter is largely predicated on the expectation that Tesla will fail to hit its 5,000-per-week target. This skepticism isn't unwarranted, as Tesla generally misses its targets more often than it hits them. It probably didn't reassure investors much when CEO Elon Musk joked about going bankrupt for April Fools' Day.

If Tesla does return to capital markets this year, the company will also face tough choices on what type of capital to raise. The company conducted its first ever (non-convertible) junk bond offering last year. Those bonds have been falling in value, a decline that was exacerbated by Moody's downgrading Tesla's corporate credit rating late last month. That offering enjoyed robust demand, but bond investors may not be so optimistic this time around if Tesla tries to raise debt capital.

Any equity raise would be dilutive to existing shareholders, which investors are somewhat accustomed to. After all, shareholders did just approve Musk's overly generous compensation plan, which would dilute the investor base further if Tesla can hit various milestones.

Neither route is appealing for investors. As has been the case for the past year, Tesla desperately needs to ramp Model 3 production.