Please ensure Javascript is enabled for purposes of website accessibility
Log In Help Join The Motley Fool
Free Article Join Over 1 Million Premium Members And Get More In-Depth Stock Guidance and Research
By Demitri Kalogeropoulos – Apr 10, 2018 at 9:31AM

Besides a cheaper valuation, is there reason to chose this stock over its main retailing rival?

An industry's second-place company can sometimes generate better long-run returns for investors than its leader can. After all, the runner-up benefits from the same positive trends that apply to its rival, but its shares come with a discount that may not be justified by its weaker market position.

Lowe's Companies Inc. (LOW 3.65%) is firmly in runner-up territory in the home improvement market. In its battle against Home Depot (HD 5.02%), the retailer comes up short in key metrics including sales growth, profitability, and financial efficiency.

Wall Street has assigned a far lower valuation to its stock, so let's look at whether that pricing represents a good deal for investors today. 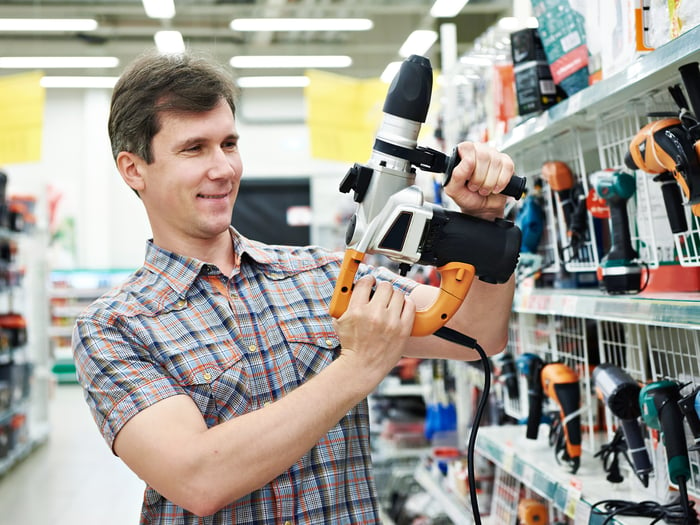 Anything you can do, I can do better

Lowe's recently closed the books on a decent fiscal year that nevertheless included stubborn market-share losses and missed opportunities. The industry expanded at a robust pace thanks to broad economic growth and the impact of rebuilding efforts from hurricanes that pounded the southeastern U.S. in the late summer. Following those natural disasters, Home Depot saw its sales growth speed up to a blistering 7% pace for the year as customer traffic improved by 2% and average spending surged.

Lowe's expansion pace, meanwhile, decelerated to a 4% rate from 4.2% in the prior year, and its customer traffic rose by less than 1%.

The retailer's financial metrics trailed the industry leader by a wide margin, too. Operating income stopped at 9% of sales, compared to 14.5% for Home Depot. Return on invested capital was 19%, while its bigger rival managed 34%.

If there's a silver lining around that poor outing for Lowe's, it's that the company is now motivated to make aggressive strategic changes. Following the fourth-quarter release, executives said they're working with a sense of urgency to improve metrics like customer traffic and profitability. CEO Robert Niblock recently announced plans to step aside and make room for fresh leadership, too. 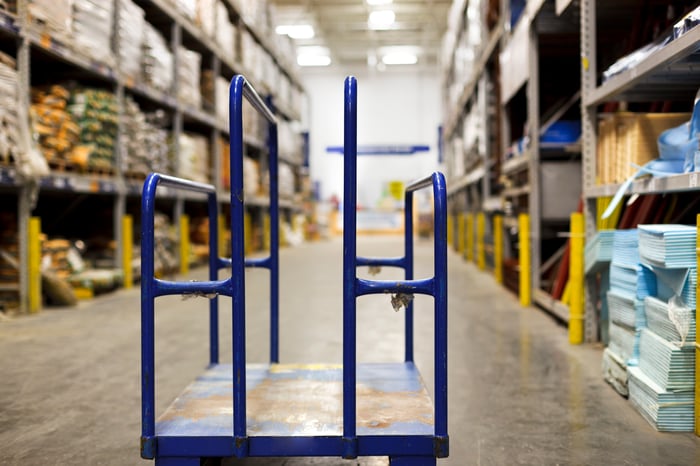 It will take time for a new boss to transition into the business before making the types of changes that investors can judge for their positive effect on operations. So for now, shareholders should accept the company's conservative forecast as the most likely scenario for 2018. Niblock and his team are targeting comps of about 3.5% while operating income dips slightly to just below 9%. For context, Home Depot is aiming for a 5% comps boost and steady profitability of 14.5 %.

As you might expect, Lowe's stock is priced at a discount to its better-performing rival. Investors must pay 19 times projected earnings for Home Depot, compared to 16 times for Lowe's. The valuation gap is far more pronounced when it comes to revenue, as Home Depot's price-to-sales ratio is double Lowe's results after Home Depot stock gained over 50% in the past three years, versus an 18% increase for Lowe's. 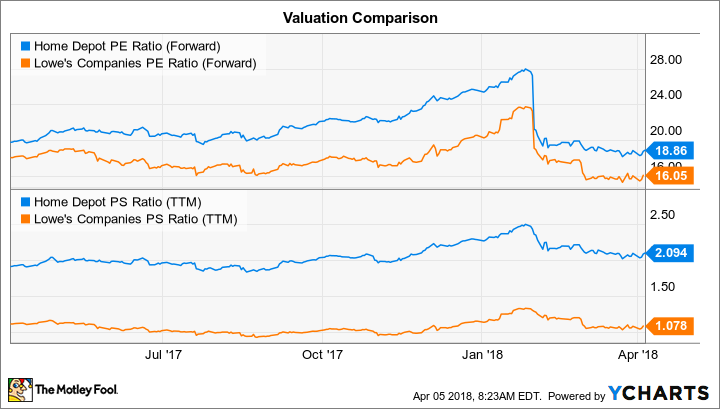 A Home Depot investment carries a higher direct income component, since shares pay a dividend yield of 2.5%, compared to 1.9% for Lowe's. Home Depot targets returning a more generous 55% of earnings each year in the form of dividends, too, compared to Lowe's 35%.

Since Home Depot is more attractive, both in terms of its operations and its finances, the key factor tilting in Lowe's favor right now is its cheaper valuation. In my view, that's not enough of a reason to buy a stock. Thus, investors looking for access to this market should consider the industry leader even at its premium price -- at least until the runner-up can prove that it can match the industry's growth rate.