With a company like WD-40, every little bit helps, and management found some additional money to reinvest in the business.

If you look at any investor presentation from WD-40 Company (WDFC 1.31%), you will see a slide that highlights management's goal to have $700 million in annual sales by 2025. At the company's current sales rates, getting to $700 million is going to be a challenge. Thanks to some recent events, that goal has become slightly easier.

Let's take a look at how far along WD-40 is at meeting this goal, and what management thinks will be a factor in driving higher sales growth.

The two things worth pointing out in WD-40's most recent results are its sales and the impact of tax law changes on the bottom line. Even though the company reported a 5% increase in sales, a large portion of that came from foreign currency changes (a $4.3 million benefit). Absent those currency gains, sales for the quarter increased a much more modest 1%. That sales result was weaker than expected and was a driving force in the stock's sell-off following the earnings release.

That slight sales miss was easily covered up by the company's lower tax rate, which helped to significantly boost the bottom line. On an EBIT basis, results in the last quarter and in the prior year were more or less flat. However, the company's new tax rate of 22%-23% has so far reduced its tax burden by 44% in 2018. 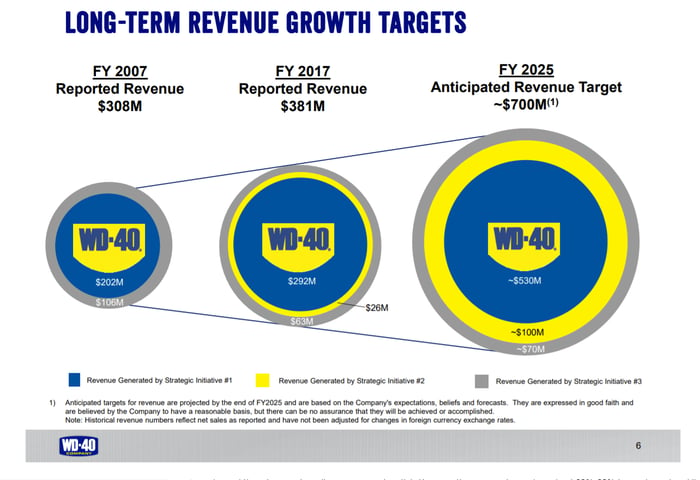 Despite the tepid sales numbers, though, management was encouraged by the results so far in this fiscal year, and so it raised sales and earnings-per-share expectations for the year. According to management, WD-40 will generate sales growth in the 7%-9% range, and fully diluted EPS will land between $4.07 and $4.14, which is up from previous guidance for 4%-6% sales growth and $3.91-$3.98 per share in earnings.

To meet the company's lofty sales growth targets by 2025, WD-40 will have to produce better sales growth rates than it did this past quarter and will have to consistently hit the high end of this year's sales growth range all the way out to 2025. That isn't an easy task, but CEO Garry Ridge said in his prepared remarks that the changes to the tax code will give the company additional firepower to invest in sales and distribution that should help it meet those targets:

[A]s a result of the savings we expect to realize from the Tax Cuts and Jobs Act, we have decided to invest an additional $1.0 million in brand building this fiscal year. This investment will focus on two main areas around the core strategies of making our end-users aware and making our products easy to buy. This investment will enable us to fast-track our global digital presence and increase our sampling programs for WD-40 Multi Use Product to targeted end-user groups in countries identified as key growth opportunities.

While $1 million annually may not sound like much, keep in mind that the company's sales, general, and administrative costs are only $30 million quarterly, so a $1 million increase actually means something to the income statement. (You can also check out a transcript of WD-40's entire conference call here). 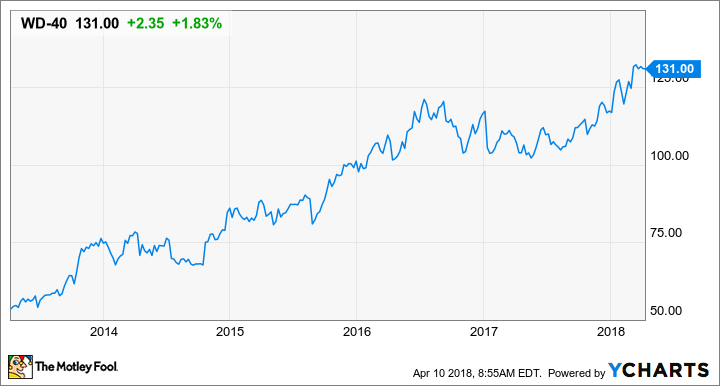 WD-40 has been around for a long time in the United States, so it's no surprise that sales growth isn't blowing the doors off. To get to management's target of $700 million annually by 2025, the company is going to have to keep sales growth about 9% or more every year. To that end, the company has several options to explore, including accelerating sales outside the U.S. and fostering some specialty-use products that can leverage the WD-40 brand.

It won't be easy by any means, but it is possible. The lower tax rate also makes it slightly easier to reinvest in new sales initiatives. If it can reach its target growth rate while maintaining its long track record of high margins and high rates of return on capital, then WD-40 will likely be a great under-the-radar investment for the next several years.