Please ensure Javascript is enabled for purposes of website accessibility
Log In Help Join The Motley Fool
Free Article Join Over 1 Million Premium Members And Get More In-Depth Stock Guidance and Research
By Rich Duprey – Apr 11, 2018 at 11:24AM

A heavy-handed approach to the latest privacy breach may damage its fast-growing social media platform.

As Facebook (META 1.21%) reels from its latest privacy scandal, and global government regulators investigate the possibility that it violated privacy laws by allowing personal user data to be collected by third parties, the social media platform is seeking to wall off its sibling apps, Instagram and WhatsApp, from a similar backlash.

Tech journals reported that Instagram last week abruptly cut off developer access to the site's API while limiting how often others can use its API to collect data on users. APIs, or application programming interfaces, are programming instructions for accessing a software application by other software; they're not user interfaces. Sites like Facebook and Instagram open them to developers who use the API to build third-party apps that are able to function with the site. 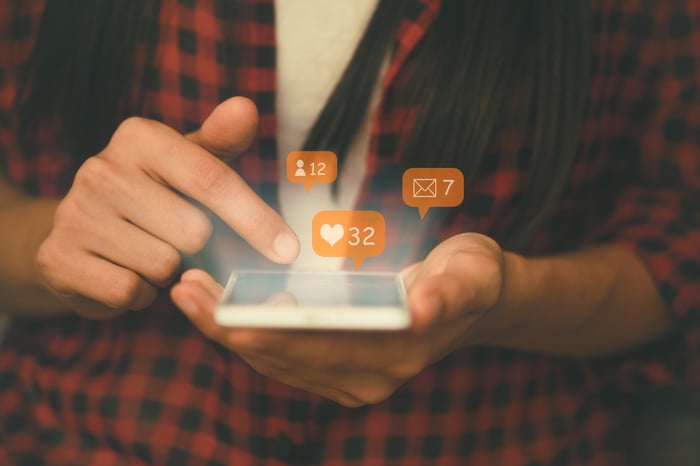 What Facebook did with Instagram was apparently limit the number of times a developer can use the API to ping the site for updated information, reportedly dropping the number of calls per user per hour from 5,000 down to just 200.

Because there was no warning that the limits were being imposed, developers were caught flat-footed from angry users who reported the apps were no longer working properly with the site. Industry site Recode notes that some industries such as customer service or brand marketing need near-constant access to Instagram data if they want to keep up with customer complaints or posts, but the limits are preventing them from doing so.

It seems Facebook took a ham-fisted approach to a problem it had and layered it on top of the rest of the organization to prevent its recurrence, without thinking through the intricacies of what it was doing.

Instagram is Facebook's billion-dollar baby. Purchased in 2012 for $1 billion, Instagram has quickly become a cash cow for Facebook. It had some 30 million users when it was bought, and no revenue, but it has since grown into one of the premiere social media platforms. Every day, 500 million people log into the site, some 800 million people log in at least once a month, and Instagram is expected to generate $10 billion in revenue by 2019.

User privacy has seemingly long been an afterthought for Facebook, which has weathered numerous criticisms over the years with the way it's played fast and loose with user privacy. Because it has grudgingly modified its settings at different times as concerns flared up, it may not have realized how serious the current situation was.

Yet in something of an apology tour to media outlets, CEO Mark Zuckerberg now admits that most users have probably had their personal information "scraped" by third parties, and Facebook has since estimated that as many as 87 million people had their information exposed to Cambridge Analytica, the political analysis firm. That is a much greater number than the 50 million that was estimated before.

The risk here is that the company faces a backlash not only from regulators and politicians, but now from users who will be leery about sharing information on social media, whether it be Facebook or Instagram, and also developers who may become leery about developing apps for the platforms.

Trust is hard to regain

Almost all of Facebook's revenue is derived from third-party advertising on Facebook and Instagram. For the past three years, advertising accounted for 98%, 97%, and 95%, respectively, of its revenue. If users aren't using the platforms to engage with friends, families, and companies, advertisers may very well shut down their advertising streams.

Warren Buffett once noted, "It takes 20 years to build a reputation and five minutes to ruin it. If you think about that, you'll do things differently." Having held such a cavalier attitude for so long, Facebook may have damaged its reputation and broken the bonds of trust between it and its users. Yet in trying to rectify the situation all at once, Facebook may also be throwing the baby out with the bathwater.