Could it mean a lower likelihood of a federal crackdown on marijuana? 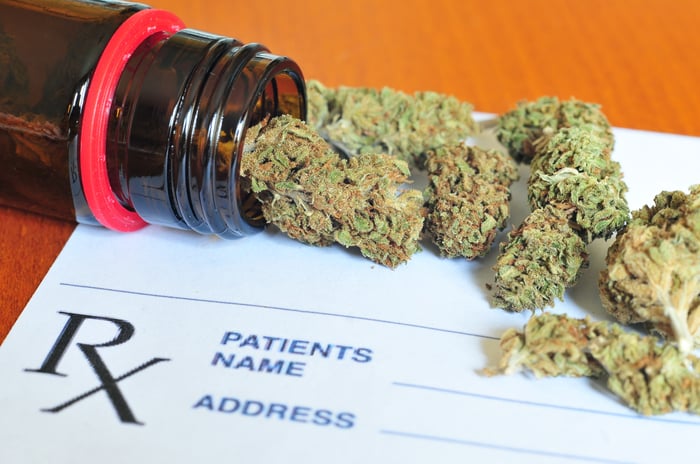 AARP teamed up with the University of Michigan to conduct a survey of 2,007 Americans ages 50 to 80. The survey asked questions related to healthy aging and included several questions focused on medical marijuana.

It's not just a vague kind of support, either. When asked if they would either definitely or probably consider talking to their healthcare provider about medical marijuana if they had a condition that could respond to use of the drug, 70% of the AARP survey respondents stated that they would. Nearly as many participants in the survey -- 64% -- felt that the government should fund research to study the health effects of marijuana.

Only 6% of individuals surveyed responded that they used medical marijuana themselves. However, that's a higher level than found in prior studies of older adults.

You might be tempted to dismiss yet another survey indicating increased support of legalization of medical marijuana. Past surveys haven't swayed enough members of Congress to pass legislation that decriminalizes medical use of the drug. Federal laws still prohibit any use of marijuana.

Could the AARP survey make a noticeable difference where others haven't? Maybe. Senators and congressional representatives know that older Americans get out and vote. In the 2016 national election, for example, 45% of the electorate was age 50 or older.

A detailed analysis of the 2016 election found that more than 70% of Americans ages 65 and older voted. Around 67% of the next highest-demographic group, individuals ages 45 to 64, turned out for the election. By comparison, only 46% of Americans between the ages of 18 and 29 voted.

In the past, it was easy for politicians to write off support for marijuana legalization as more skewed toward the younger generation. That's no longer the case. And when an AARP survey finds 80% of Americans who are highly likely to vote in support of something, it wouldn't be surprising if more elected officials start to change their tune.

This probably won't mean a major shift in the political dynamics in Washington in the immediate future, though. It will probably take a while for the effect of broader support among older Americans to influence legislators.

But it's not just senators and congressional reps who pay attention to polls -- and especially pay attention to the AARP. Federal agency heads also know that they must watch the weathervane to see which way the political winds are blowing. The recent AARP survey results could even lower the likelihood that Attorney General Jeff Sessions will direct the Department of Justice to go after states that have legalized medical marijuana.

Some investors might look at the increasing support for legalized marijuana in the U.S. and want to capitalize on the trend. These investors face a dilemma, though: There aren't many good investing alternatives. They also still face the risk that the Trump Administration could crack down on marijuana businesses despite increased public support.

Probably the best stock for investors to consider as a way to profit from the expansion of the marijuana industry in the U.S. is Scotts Miracle-Gro (SMG -2.75%). The company provides many of the critical supplies needed by marijuana growers, including hydroponics and lighting systems.

However, Scotts stock has fallen more than 20% year to date because of weakness in its subsidiary that caters to the marijuana industry. The primary issue appears to be California's slowness in finalizing regulatory policies related to the state's legalization of recreational use of marijuana. Scotts could continue to struggle until all of the regulations are firmly in place.

Some Canadian marijuana growers established U.S. operations, notably including Aphria (NASDAQOTH: APHQF). Because marijuana remains illegal at the federal level in the U.S., though, the Toronto Stock Exchange threatened to delist the stocks of companies with a significant presence in the U.S. marijuana market. That prompted Aphria to scale back its U.S. ties.

Looking north to Canada is still the best bet for marijuana investors. The country already allows legal use of medical marijuana and appears to be on track to legalize recreational marijuana later this year. But the AARP survey hints at the possibility of future changes in U.S. marijuana laws. If so, it could be the baby boomer generation that creates the biggest boom for the marijuana industry.