2018 is turning out to be a roller-coaster ride for China Lodging Group, Limited (NASDAQ:HTHT). After crashing in February only to bounce back later, shares of the hotel management company tumbled 13.3% in March, according to data from S&P Global Market Intelligence, leaving investors wondering if the stock is headed for a reversal after an incredible rally last year.

China Lodging's fourth-quarter earnings report can be blamed for the stock's drop last month. Or maybe not.

China Lodging tumbled nearly 13% the same day it released its Q4 2017 report. The company's numbers were so good that it's hard to blame them for the stock's double-digit drop. For the quarter, the company reported: 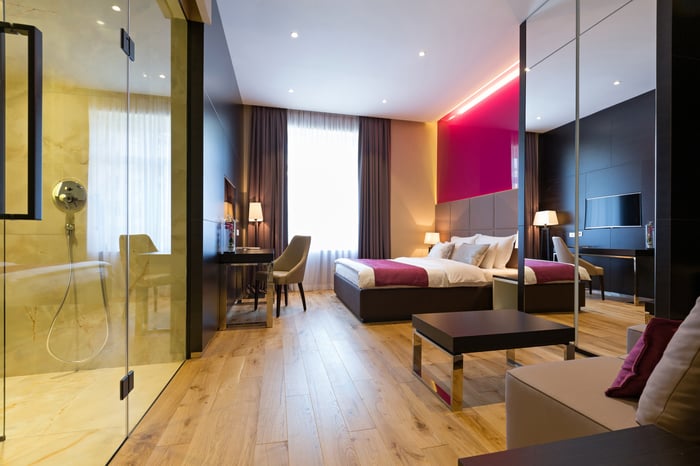 The strong growth in China Lodging's RevPAR, in particular, is noteworthy as RevPAR, which incorporates the occupancy rate as well as ADR, is the most important metric to gauge the health of a hotel company.

Why, then, did China Lodging's stock drop? Well, the company missed estimates for its top-line growth and guidance, which triggered a sell-off, especially after the stock's triple-digit rally in 2017.

China Lodging is growing aggressively, just maybe not fast enough to convince Mr. Market. In 2017, the company opened "more than three hotels every two days" and grew its room inventory by 15%. Key growth moves included the acquisition of Crystal Orange, which is expected to add value to China Lodging's midscale hotel portfolio.

In 2018, China Lodging foresees its revenue growing 16% to 19% and plans to open as many as 650 to 700 hotels, primarily in the higher-margin midscale and upscale categories. That outlook and the operational numbers tell me that China Lodging should continue to be a solid play in the Chinese lodging industry.