Stocks added to gains for the week going into earnings season, with the Dow Jones Industrial Average (DJINDICES:^DJI) rising almost 300 points and the S&P 500 (SNPINDEX:^GSPC) closing up as well.

Bank stocks took the lead on the eve of a number of earnings reports by big banks, and the SPDR S&P Bank ETF (NYSEMKT:KBE) rose 1.8%. Industrials also were strong, with the Industrial Select SPDR ETF (NYSEMKT:XLI) gaining 1.4%. 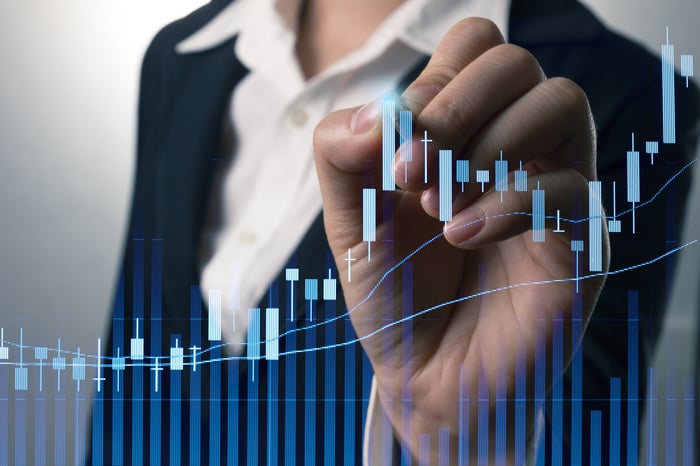 Shares of Bed Bath & Beyond tumbled 20% after the retailer reported fiscal fourth-quarter sales and earnings that beat estimates, but gave a profit outlook that was a big disappointment. Net sales for the 14-week quarter were $3.72 billion, up 5.2% compared with the 13-week quarter a year earlier, and above analyst expectations for $3.68 billion. Earnings per share, excluding the unfavorable impact of $0.07 due to the new tax law, came in at $1.48, 20% below last year's $1.84 but above the $1.39 analysts were expecting.

Comparable sales, which compensates for the difference in the number of weeks in the quarters, fell 0.6%. The company said it had strong growth from online sales, but sales from physical stores declined in the mid-single-digit percentage range.

Looking forward, the company expects EPS for the full fiscal year to fall from last year's $3.12 to "the low-to-mid $2.00 range," while analysts had been thinking it would come in at $2.70. The company also said that 2019 would bring yet another decline in earnings, and the company will not return to earnings growth until 2020.

Bed Bath & Beyond did say it was expecting to see growing comparable sales in 2018 and "moderating" declines in profit the next two years. But projecting gloomy profit results so far into the future was an unusual move, and investors understandably dumped the stock in response.

Chicago Bridge & Iron, a supplier of engineering and construction services to the energy industry, announced preliminary first-quarter results that exceeded estimates, and the stock jumped 9.5%. The company expects to report on April 23 that it had revenue between $1.7 billion and $1.8 billion and earnings per share between $0.37 and $0.43, including restructuring charges of $0.03-$0.05 per share. The analyst consensus was that the company would earn $0.34 per share on sales of $1.63 billion.

CB&I credited "[e]xcellent operating performance across the company's portfolio of projects, including the Cameron and Freeport LNG projects and the Calpine combined-cycle natural gas power project" for the strong results.

CB&I also gave a rosy view of the future, saying in the press release, "The company continues to have a robust prospect list for potential new awards in 2018. In particular, CB&I is experiencing a high level of bid activity and expects customer investment decisions to be made this year on a number of very large projects in LNG, petrochemical and other markets."

Chicago Bridge & Iron is in the process of merging with McDermott International (NYSE:MDR), a move that was not well-received by Wall Street when it was announced in December. McDermott also issued preliminary results this morning that topped the analyst consensus for earnings per share, and that stock popped 6.7%.

Given stronger oil prices and prospect for a pickup in capital investment by energy companies, the market may be starting to warm up to the prospects for the merger, which is expected to complete this quarter.