The news broke last night -- and broke Wall Street's heart: Chicago Bridge & Iron (NYSE:CBI) is selling itself to McDermott International (NYSE:MDR). When that happens, all chance that analysts will profit from their buy ratings on Chicago Bridge will be lost. Accordingly, these analysts are canceling their bets and downgrading Chicago Bridge stock. 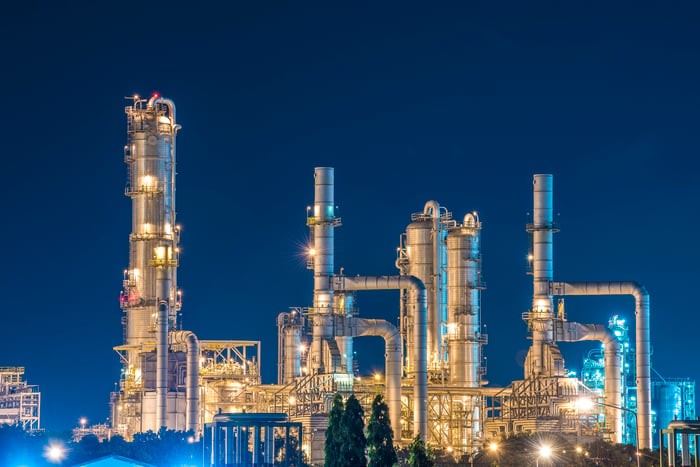 Two big oil infrastructure plays make a bet that they'll be better together -- but analysts are not so sure they will. Image source: Getty Images.

Chicago's no bridge over troubled waters

Let's start with a quick background on the troubles facing Chicago Bridge & Iron stock -- which despite what the name might imply, is actually less concerned with building bridges and more focused on the construction of upstream and downstream process facilities for the oil and gas industry.

This line of business got Chicago Bridge in trouble earlier this year when cost overruns, tight deadlines, and other "unusual items" cost the company a series of one-time charges and writedowns, and put a crimp in cash flow. Analysts have been downgrading Chicago Bridge stock all year long -- except for two analysts in particular: Deutsche Bank and DA Davidson.

Because they've got hi-i-i-gh hopes!

In contrast to much of Wall Street -- which, according to data from S&P Global Market Intelligence, has assigned ratings ranging from neutral to underperform on Chicago Bridge stock -- Deutsche and Davidson have remained stubbornly optimistic about their hopes for a turnaround in Chicago Bridge's fortunes.

As recently as May, Deutsche Bank reiterated a buy rating on Chicago Bridge stock with a $38 price target (it's since apparently cut that target by half), according to ratings watcher StreetInsider.com (requires subscription). Similarly, StreetInsider data shows that DA Davidson has maintained a buy rating on Chicago Bridge since June 2014. Davidson says it previously priced Chicago Bridge at $25 a share, though its last reported public pronouncement (in 2012) had the stock priced at $50 a share.

Sadly, it now looks like Chicago Bridge will never get anywhere close to hitting either of those targets. Chicago Bridge stock closed yesterday just shy of the $18 mark, and is falling hard on news of today's merger agreement -- down 9.3% at last report, at $16.25 a share and falling.

Why? Let's take a quick look at the details of the transaction. As explained in a press release this morning, McDermott International is structuring its acquisition of Chicago Bridge as an all-stock transaction, trading 2.47221 shares of McDermott common stock for each of the 101.4 million shares of Chicago Bridge stock now outstanding -- so about 250 million McDermott shares, total.

This structure makes the value of the acquisition dependent on the share price of McDermott stock -- which is falling. Priced at $6.76 per share at last report (down 11% already today), 250 million shares of McDermott equate to a purchase price of about $1.69 billion for Chicago Bridge, which is a mere 2.4% premium to the latter's current market cap -- and less than Chicago Bridge was worth before the merger was announced.

(Note: Media are reporting the total value of this merger as $6 billion. Here's how that works: Chicago Bridge has a market cap of about $1.7 billion and net debt of $1.7 billion more. McDermott has $1.9 billion in market cap, and a little over $0.1 billion in net debt. Add all that up and you get $5.4 billion in total "enterprise value" for the two companies -- and probably closer to $6 billion before both stocks began tumbling this morning.)

Despite this disappointing reaction from the stock market, Deutsche Bank thinks things will eventually settle down and see Chicago Bridge acquired at an imputed price of about $20 per share. Davidson, which sees little chance of anyone else bidding for Chicago Bridge at this point, thinks the closing price will be closer to $19. Both analysts now rate Chicago Bridge the equivalent of hold. In any case, neither analyst now sees any reason to buy the stock.

In its press release, McDermott argues that combining McDermott's strength in building oil infrastructure offshore with Chicago Bridge's strength onshore will create a stronger company in both fields, and one that will "be cash accretive ... within [the] first year after closing with annualized cost synergies of $250 million expected in 2019 and substantial revenue synergies" on top of the $10 billion in "combined revenues" the two companies already collect annually.

McDermott further believes that the combined companies will produce strong free cash flow, permitting them to "rapidly de-lever" the debt that will come along with acquiring Chicago Bridge.

As for myself, I have my doubts. Over the past year, S&P Global data show Chicago Bridge burning through $583 million in negative free cash flow. Furthermore, the company has been free cash flow negative in two out of the past five years, and only generated free cash flow in excess of reported net income once.

Granted, McDermott itself is currently free cash flow positive, having produced about $60 million in positive cash profits over the past year. On the other hand, McDermott has been free cash flow negative in every one of the past five previous years. Given this record of astounding cash underperformance by both of the merging companies, I'm unenthusiastic about the chances of even a combined Chicago Bridge-McDermott making much of a dent in their merged debt loads.

So long as Deutsche Bank and DA Davidson are downgrading the Chicago Bridge anyway, they might as well just go ahead and downgrade the whole merged entity while they're at it -- to sell.