Shares of construction and engineering company Chicago Bridge & Iron (NYSE:CBI) fell as much as 15% in Tuesday trading, before retracing to book a 13.8% loss by day's end.

Chicago Bridge had reported its fiscal third quarter 2017 earnings the evening before, and missed analyst estimates pretty badly. Instead of the $0.53 per share in pro forma profit that Wall Street was expecting, Chicago Bridge announced adjusted earnings of just $0.34 per share. The company's quarterly revenue likewise fell short of Wall Street's anticipated $1.81 billion. 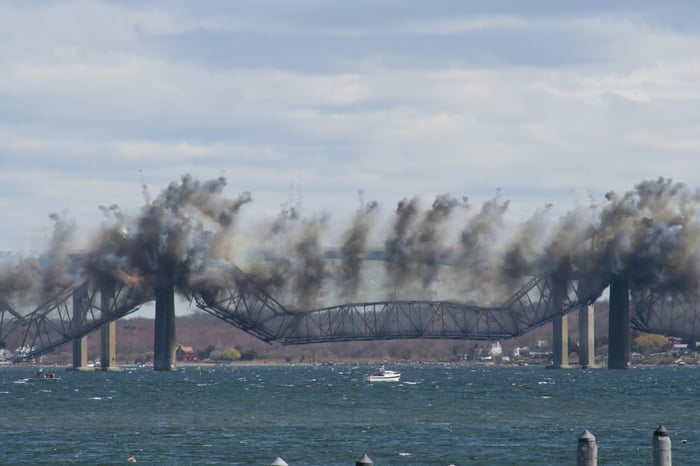 And that's the good news. The bad news is that, when calculated according to the usual GAAP accounting standards, Chicago Bridge & Iron earned less than a third of its supposed "adjusted profits." Net income for the quarter amounted to just $0.10 per share -- a 92% drop from last year's $1.20 profit. Revenues, which came in at $1.74 billion for the quarter, suffered a steep 19% year over year decline.

Management blamed "continued cost pressure during the quarter, primarily on the IPL and Calpine power projects," as well as a series of "unusual items" costing it $0.31 per share in one-time charges, for the earnings disappointment.

The implication of all that, of course, is that next quarter hopefully won't be so disappointing for Chicago Bridge & Iron shareholders. So how is next quarter looking?

Actually, not too shabby. According to Yahoo! Finance data, analysts are looking for Chicago Bridge to earn about $0.53 per share on $1.83 billion in revenues in Q4. Management, however, is now guiding investors to expect a bit more than that. CB&I's latest guidance suggests earnings should range between $0.50 and $0.60 per share -- or $0.55 at the midpoint, and two cents above consensus estimates. Chicago Bridge is also looking for revenues to come in between $1.8 billion and $2 billion in the current quarter, comfortably ahead of expectations at a range midpoint of $1.9 billion.

Granted, even if everything works out as management says it will, CB&I investors are still almost certainly looking at a full-year loss for 2017, a negative P/E ratio for CB&I stock -- and no dividend. No wonder they're upset.