The company has suspended its dividend, but that's only part of the story.

Shares of engineering and construction powerhouse Chicago Bridge & Iron (CBI) are down 32.5% as of 12:05 p.m. EDT in response to yesterday's after-hours earnings report.

Chicago Bridge reported a huge drop in second-quarter revenue last night. Whereas the company took in $2.2 billion in revenue in last year's Q2, Q2 2017 produced sales of just $1.3 billion. That was significantly below the $2.44 billion in sales that Wall Street was expecting -- an enormous miss.

And the news got worse. Instead of earning Wall Street's expected $0.85 per share, Chicago Bridge reported a GAAP loss of $3.02 per share. Given that even $0.85 would have been down significantly from last year's Q2 profit of $1.09 per share, perhaps Wall Street had thought it was being conservative in predicting its steep decline in profits. Turns out, analysts weren't nearly conservative enough.

And even that wasn't the end of the bad news. Bleeding cash, Chicago Bridge capped off its disastrous second-quarter earnings report with a real bombshell: Its dividend, currently a respectable 1.7%, is going away. 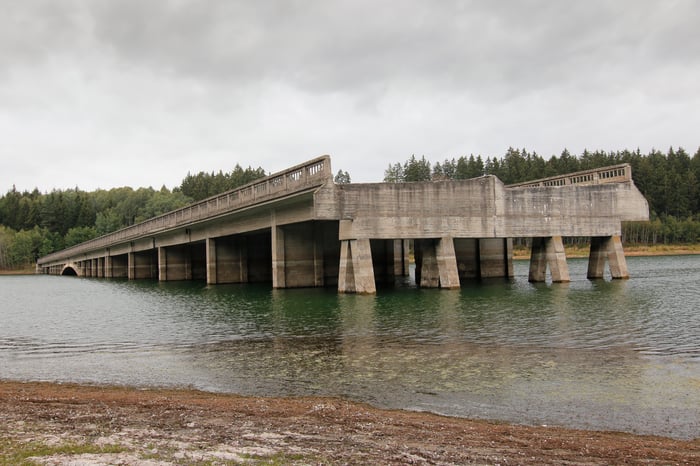 Is this stock a bridge to nowhere? Image source: Getty Images.

Management promises that it will undertake a "comprehensive cost reduction program" and add "additional rigor and discipline into our execution and risk management processes" -- which sounds like good news for investors who own Chicago Bridge stock, inspiring hopes its profits will turn around. For dividend investors, however, this news is nothing short of disastrous. Not only is their stock worth less today than it was yesterday, but now they won't even have the pleasure of seeing their dividend yield (the dollar amount of the dividend, divided by the now-smaller share price) go up.

Investors are abandoning CB&I stock in droves, and no wonder. On top of all the above, Chicago Bridge revised down its guidance for the rest of this year, saying that second-half revenue will range from $3.7 billion to $4 billion, and profits will be only $1 to perhaps $1.25 per share. After the company racked up GAAP losses of nearly $4 a share already in the first half, that means there's zero chance Chicago Bridge & Iron stock will be profitable this year.