Please ensure Javascript is enabled for purposes of website accessibility
Log In Help Join The Motley Fool
Free Article Join Over 1 Million Premium Members And Get More In-Depth Stock Guidance and Research
By Matthew Frankel, CFP® – Apr 13, 2018 at 10:51AM

The largest U.S. bank by assets started the first-quarter earnings season on a high note.

JPMorgan Chase (JPM 4.68%), the largest U.S. bank by assets, reported its first-quarter 2018 earnings and handily surpassed analyst expectations on both the top and bottom line. Not only did the bank generate solid growth in most of its business segments, but it also did a good job of controlling expenses and received a nice boost from tax reform.

Here's a rundown of JPMorgan Chase's headline earnings numbers, as well as a closer look at how the bank's business is doing and what investors can expect. 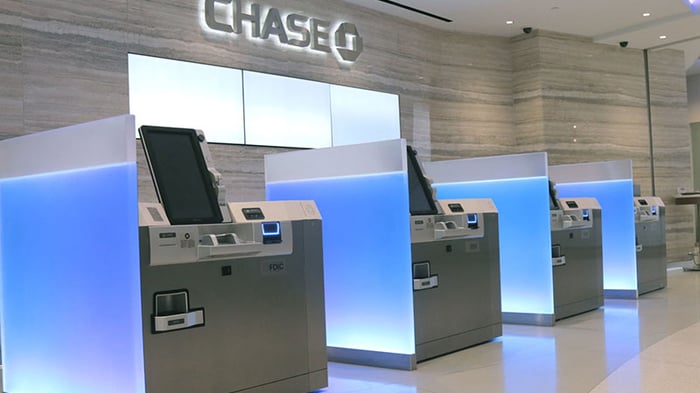 JPMorgan Chase reported earnings of $2.37 per share, which surpassed analyst expectations of $2.28 and represented a 44% increase from the first quarter of 2017. Additionally, the bank's $28.52 billion in revenue handily beat the $27.68 billion estimate, and was $2.7 billion higher than a year ago.

The strong performance is due to a combination of factors, including expanded margins, solid expense management, growth in loans, deposits, and investment assets, and the new lower corporate tax rate.

"2018 is off to a good start with our businesses performing well across the board, driving strong top-line growth and building on the momentum from last year," JPMorgan Chase CEO Jamie Dimon said.

I mentioned that JPMorgan Chase grew most of its business impressively during the first quarter. Just to name some of the key items investors should know:

In addition, the bank's expenses were kept in check. Despite revenue rising by $2.7 billion, JPMorgan Chase's expenses were just $800 million higher than a year ago, which led to an improved 56% efficiency ratio.

The result of the combination of growth, expense management, and tax reform was the 44% year-over-year earnings growth, as well as an extremely impressive 15% return on equity (ROE) and 1.37% return on assets (ROA). Both metrics handily exceeded the industry benchmarks of 10% and 1%, respectively, and represent a huge improvement from JPMorgan's already-impressive 11% ROE and 1.03% ROA it generated in the first quarter of last year.

To be fair, JPMorgan's earnings report wasn't perfect. One area that missed expectations was the bank's fixed-income trading revenue, which has been a disappointing piece of the puzzle for some time now. Despite expectations for a 3% increase, fixed-income revenue was flat year over year.

"The global economy continues to do well, and we remain optimistic about the positive impact of tax reform in the U.S. as business sentiment remains upbeat, and consumers benefit from job and wage growth," Dimon said.

As a result, JPMorgan Chase expects the rest of the year to be just as strong as the first quarter was, with net interest income growth of 8% to 9% and loan growth of 6% to 7%. Combined with the company's lower tax rate, which is expected to stay around 20%, there's no reason to believe that the company's earnings will remain as strong as its first-quarter numbers throughout the year.