Please ensure Javascript is enabled for purposes of website accessibility
Log In Help Join The Motley Fool
Free Article Join Over 1 Million Premium Members And Get More In-Depth Stock Guidance and Research
By Jamal Carnette, CFA – Apr 16, 2018 at 9:42AM

The grocery chain is hiring 11,000 people to compete against Amazon and Walmart. Should you take a bite of this cheap stock?

Kroger Company (KR -1.69%) had a decent fourth quarter by the numbers. The company reported adjusted EPS of $0.63, in line with analyst estimates, and revenue of $31 billion, beating the consensus by $200 million. Instead of shares rallying on the report, they sharply sold off due to weaker-than-expected guidance from management.

Specifically, Wall Street was less enthused by Kroger's plans for the savings created by the recently enacted GOP tax cut. Instead of having the bulk of the savings tumble down the income statement to shareholders, Kroger management planned to equally split the largesse three ways: on employee salaries, capital investments, and shareholders. Kroger's plan to spend on employees is coming into focus, but will it lead to stock gains? 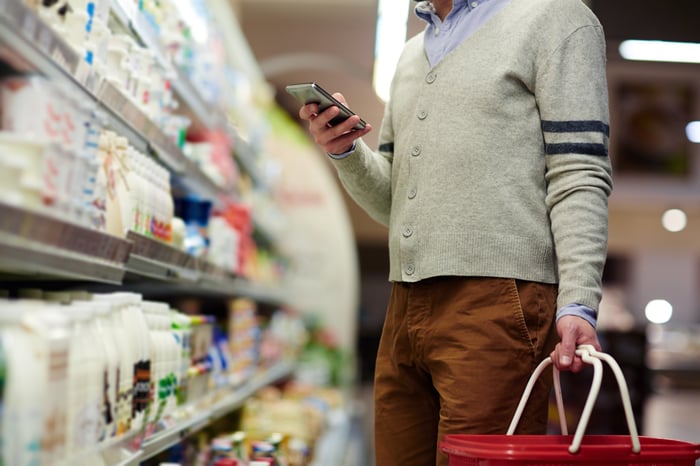 According to a report from The Wall Street Journal, Kroger will invest in new employees in a major way. The supermarket plans to hire up to 11,000 employees, a 2% increase in its headcount, to improve customer service and increase efficiencies. Per the Journal, the hires will be at the store level and will include cashiers and personnel for the store's nascent online operations.

Kroger's management launched its Restock Kroger initiative last year to reinvigorate same-store sales. The company expects to spend up to $500 million on wages, benefits, and training.

Kroger has a lot riding on its Restock Kroger initiative because it's a heavily watched metric on Wall Street, and Kroger has endured a significant deceleration in this figure. In 2017, Kroger reported that same-store sales increased by 0.7%, lower than the 5.2% growth the company posted in 2014.

A little behind the curve, but priced as such

Due to intense competition in the sector, Wall Street watches Kroger's same-store sales closely. As a pure-play grocer, Kroger has found itself under attack from the supercenter model, most notably Walmart and Target. And now grocers are shifting to online order and delivery, with Amazon expected to be a force in this market due to its Whole Foods acquisition.

The company appears slightly behind the curve on the convenience factor. While the superstores and Whole Foods are busy developing online business, Kroger is doubling down on its Scan, Bag, and Go program with plans to expand from a pilot program to 400 locations this year. Scan, Bag, and Go allows customers to ring up their purchases via a handheld scanner, and avoid the checkout line. Kroger expects minor improvement from Restock Kroger and Scan, Bag, and Go, forecasting same-store sales to rise between 1.5% and 2% in 2018.

While Kroger faces increased competition, the stock is currently priced for Armageddon. The company trades at 11 times forward earnings versus the greater S&P 500's multiple of 17 times, while paying a dividend of 2% per year. Value-oriented investors should put the company on their watchlist, especially if the company's Restock Kroger initiative pays off in a major way.