Please ensure Javascript is enabled for purposes of website accessibility
Log In Help Join The Motley Fool
Free Article Join Over 1 Million Premium Members And Get More In-Depth Stock Guidance and Research
By Ashraf Eassa – Apr 16, 2018 at 8:05AM

This Fool doesn't think highly of the prospects for the chip that Intel developed in conjunction with AMD. 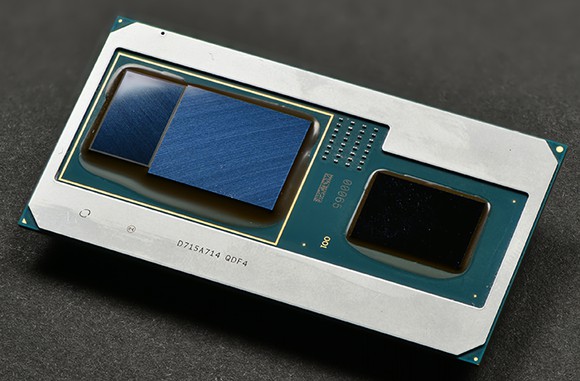 This product, which is marketed and sold by Intel, is targeted at thin-and-light gaming notebook computers.

From a business point of view, it's not surprising that Intel would attempt to build such a product -- the gaming laptop market is on fire and Intel wants to capture as much dollar content as possible in such computers. Moreover, given Intel's public claims that it intends to build its own high-performance stand-alone graphics processors, it's only natural to expect that Intel will, in future products, rip out the AMD graphics processor and put in an Intel-designed one. Think of this part, which combines Intel's and AMD's technology, as a proof of concept that actually made it to market.

In this column, I'd like to make the following argument: The Kaby Lake-G part that Intel has brought to market is unlikely to be a commercial success for the company.

One glaring issue with the Kaby Lake-G part is that it uses a last-generation processor. It has just four processor cores and is manufactured using Intel's last-generation 14-nanometer-plus technology.

However, Coffee Lake-H incorporates six processor cores and is built on a more advanced 14-nanometer++ technology. It's simply a much better processor for gaming and other performance-sensitive tasks.

Moreover, while the graphics processor embedded on the same package with the Kaby Lake processor is certainly capable, the reality is that most gaming laptops are powered by faster, more power-efficient stand-alone graphics processors from graphics giant NVIDIA (NVDA -0.66%).

Not only would a laptop powered by a Coffee Lake-H processor and an NVIDIA GTX 1060 or better be an objectively better device for gaming than one with a Kaby Lake-G chip, but NVIDIA's brand is arguably stronger among gamers than either Intel's or AMD's. The strength of NVIDIA's brand among gamers makes it more likely that key gaming notebook vendors will invest more in the development of Coffee Lake-H and NVIDIA GeForce-based laptops than in trying to build systems around the Kaby Lake-G part.

For some perspective, since Intel announced Coffee Lake-H just a few days ago, key gaming PC makers like ASUS, MSI, Dell, Acer, Gigabyte, Eurocom, and others have all announced gaming systems using Coffee Lake-H and NVIDIA GeForce graphics processors. By contrast, very few systems based around Kaby Lake-G have been announced, and those systems don't even seem to be aimed explicitly at gamers. (The two I could find were a Dell XPS 15 2-in-1 convertible laptop and an HP Spectre x360 2-in-1 convertible laptop).

I think that it's quite telling that major computer vendors are much more willing to bet on laptops with stand-alone NVIDIA graphics than on an integrated part with an Intel processor and AMD graphics.

Over the long term, Intel can improve the competitiveness of future "-G" processors by incorporating its latest CPUs rather than ones a generation behind, as well as by continuing to advance the performance of the graphics processors embedded alongside the processors. However, a key hurdle that Intel will still face with such parts is the sheer brand power that NVIDIA has in the gaming market, as well as NVIDIA's formidable graphics-processor performance.

Remember, even if Intel builds competent stand-alone graphics processors to pair with its processors, systems powered by such systems will have to compete with computers powered by Intel processors and NVIDIA graphics.