The company reported net income of $1.6 billion in the first quarter, up 31% from the same period a year ago, helped by rising cardholder spending and borrowing, and topped off by a lower corporate tax rate.

AmEx's first quarter: By the numbers

Banks are rarely exciting businesses, as little changes from quarter to quarter, but it's important to keep an eye on the moving pieces that together drive the bulk of any bank's profitability. Here are the most important developments this quarter:

On the conference call, management touched on a few of AmEx's most important earnings drivers.

Rewards expenses are a perennial issue for credit card issuers who compete primarily based on the benefits (cash, airline tickets, etc.) they can offer cardholders for signing up and spending. Jeff Campbell, American Express' executive vice president and chief financial officer, said that the company expects rewards expenses to "grow roughly in line with billings," noting that rewards expense increased 14% year over year compared to a 13% increase in billed business.

Campbell also pointed out that AmEx expects provisions for loan losses to increase "in the mid-30% range" for 2018, while highlighting increased marketing expenses later in the year, as the company directed $200 million of its tax savings to advertising and business development, which it expects to spend over the next three quarters. 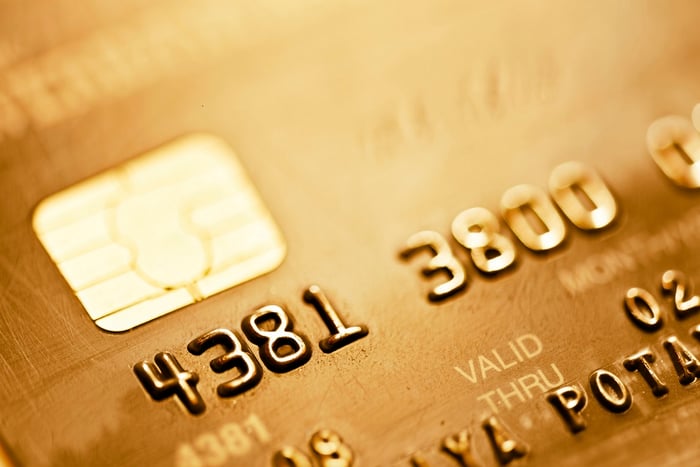 AmEx's first quarter showed signs of progress as loans, billed business, and cards-in-force showed substantial improvement year over year, partially driven by the acquisition of a Hilton portfolio. But even excluding the impact of that acquisition, loans and billed business still increased at a double-digit rate.

Most importantly, spending and lending is growing fastest in proprietary cards, or cards where AmEx typically earns more on every dollar its clients spend, since it doesn't share the income with airlines, hotels, or retail partners.

Upbeat about its progress so far, the company now expects that full-year earnings per share will be at the high end of its earlier guidance range of $6.90 to $7.30 per share, news that shareholders should be happy to hear.