Delayed orders ate into the meter manufacturer's margins in the first three months of 2018.

Last fall, I identified three "tiny, mighty dividend stocks"; small-capitalization corporations with high growth potential, which have also demonstrated a history of steady dividend increases. Throughout this year, I'm planning on following the fortunes of these three dividend dynamos. In this article, we'll check in on Wisconsin-based Badger Meter, Inc.'s (BMI -0.17%) first quarter of 2018.

While the top-line expansion was welcome, it fell below management's expectations, as domestic municipal water meter sales were flat against the first quarter of 2017. Municipal water-related products make up roughly three-quarters of Badger Meter's business, so even a modest gain in this category would have pushed revenue beyond its low-single-digit improvement. The company blamed the municipal stasis on "a delay in several expected orders due to poor weather conditions in a number of [our] key markets."

Weakness in this revenue stream was partially offset by higher international municipal water meter sales, particularly in the Mideast, where the company received a major new order during the quarter. 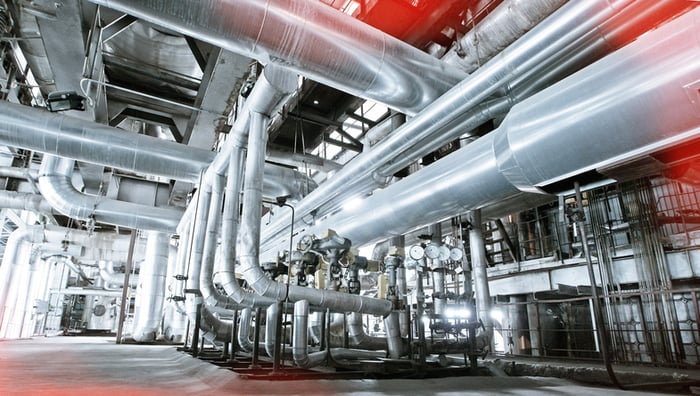 A slight top-line gain didn't help gross profit. During the last three months, Badger Meter moved manufacturing capacity from its Scottsdale, Arizona, plant to its facility in Racine, Wisconsin. This move, coupled with higher commodity costs, crimped gross margin, which fell to 35%, from 38% in Q1 2017.

Management also pointed to lower-capacity utilization as a factor behind the 300 basis point margin decline. As a manufacturer, Badger Meter has appreciable fixed costs, and when volume dips, the difference is felt in the form of fewer gross profit dollars.

Healthier sales would have provided the margin some breathing room. During Badger Meter's earnings conference call, CEO Richard Meeusen repeatedly reminded analysts that the company's sales are often "lumpy" from quarter to quarter. This is a favorite term of CEOs who run businesses with highly variable sales patterns. The essence of lumpy revenue is that year-over-year quarterly comparisons may not hold much meaning for investors.

In the metering industry, this makes intuitive sense, as metering equipment is built to last for years, and customer ordering patterns are inconsistent at best. Both Meeusen and CFO Richard Johnson pointed out that field sales people were relaying that poor weather conditions had stymied first-quarter deals.

On a positive note, management expects that delayed orders will be shipped in the second and third quarters of this year. This is the other side of variability or lumpiness: Low capacity utilization in one quarter due to soft sales can often result in near-capacity production in following quarters.

Badger Meter is optimistic that current-year results will accelerate in the quarters ahead. Specifically, management singles out momentum in high tech products, including the company's "E-Series" ultrasonic water meters, and its ORION endpoint cellular products, which utilize cellular networks for meter reading and data capture relay.

In addition, recently enacted price increases should wend their way through Badger Meter's income statement this year, alleviating some of the pressure on weaker volumes -- and lifting sales dollars higher against Badger's fixed cost base.

Badger Meter Is Rebounding in the Back Half of the Year