Chip giant Intel (NASDAQ:INTC) currently dominates the market for processors that go into notebook and desktop computers, but its last attempt to become a key vendor of applications processors for smartphones and tablets failed miserably. 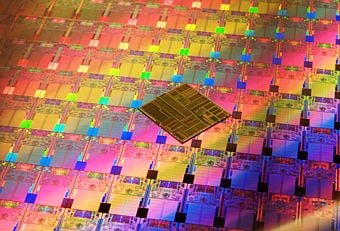 With that said, in scanning Intel's job boards, I came across some evidence that Intel intends to re-enter these markets.

Here's a snippet from an Intel job listing that I found:

You will be [involved] in the training, design and development of next generation SOC/CPU for [a] wide range of Intel products ranging from Client PC, smartphone, tablet to wearable.

I don't think it gets any plainer than this: Intel is hiring engineers to work on processors that'll go into smartphones, tablets, and wearable computing devices.

My guess is that Intel is planning to re-enter the smartphone processor market because things really have changed for the company since the last time it tried to enter it.

Firstly, Intel has made it clear that it's willing to work with CPU core vendor Arm. One of the problems Intel faced with its prior mobile efforts is that its Atom-based mobile processors were less powerful and less power-efficient than those made by Arm. Moreover, many Android apps faced compatibility/performance issues when running on Intel architecture, but a move to Arm-based processors would mitigate that problem.

Additionally, Intel's cellular modem technology is now credible, something that it couldn't say several years ago. Cellular modems are a critical component of modern mobile processors, so now that Intel has good offerings on that front, it can integrate that modem technology with future applications processors to make viable products.

Tablet processors tend to be the same as smartphone processors, so if Intel is re-entering the smartphone applications processor market, it'd take minimal incremental effort to sell those processors to tablet makers, as well.

When could we see these chips?

I think it'll be a little while before we see Intel announce smartphone/tablet/wearable computing products. For example, the job listing mentions that the chips that Intel is working on will be manufactured on both Intel's 10-nanometer technology as well as the follow-on 7-nanometer technology.

The earliest we could see such products is next year (since that's when Intel's 10-nanometer technology should be in full production), but I'd be surprised to see any Arm-based products from Intel that explicitly target Android smartphones and tablets next year, with 2020 and possibly beyond seeming like more likely launch years.

Over the long term, if Intel can become a significant player in these markets, it should enable Intel to enjoy meaningful revenue and profitable growth.