Life could get more expensive in two important ways.

If you've followed the news at all lately, there's a good chance you've seen something about President Trump's proposed tariffs on certain imports, as well as the term "trade war" being used to describe what could happen.

While it may not seem like it, a trade war could have a major effect on the wallet of every American consumer. Here's what you need to know about the potential repercussions of a trade war on your own finances. 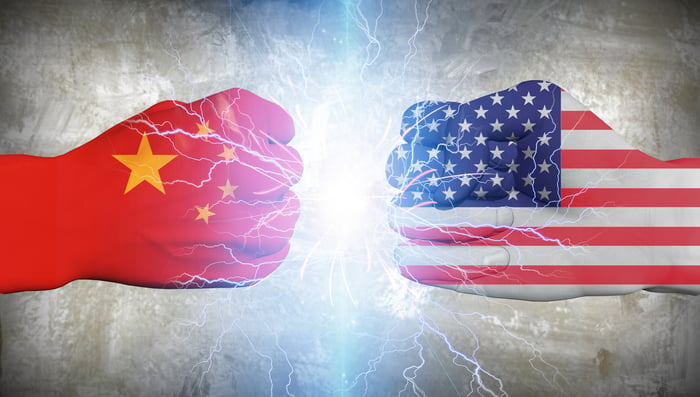 Rising costs could be on the horizon

First, U.S. tariffs on imported goods could have the effect of raising the prices you pay.

As an example, based on a 25% tariff on steel imports, if a car manufacturer uses $600 worth of imported steel to make one vehicle, the tariff would translate to a $150 increase in material costs. This increase would most likely be passed on to the consumer.

What would this mean to the overall cost of goods and services? It's difficult to say for sure, but Alex Capri, a senior fellow at the National University of Singapore Business School, estimated that 2018 consumer price inflation would be 1.5% higher than expected if a retaliatory trade war were to materialize between the U.S. and China.

The less obvious result of a trade war could be higher interest rates on credit cards, auto loans, mortgages, and more.

Here's why: One of the Federal Reserve's main goals is to keep inflation in check, and if inflation gets too high, the Fed will generally raise interest rates in an attempt to slow things down. Currently, the Fed's inflation target is 2%, and the central bank has already laid out its anticipated interest rate hike activity for the next few years.

Specifically, after its March 2018 meeting, the Fed projected 1.9% inflation this year, 2% in 2019, and 2.1% in 2020 -- all right on target. The Fed already expects to do another seven or eight quarter-point rate hikes by the end of 2020 based on these current inflation projections.

If inflation were to spike, the Fed could get even more aggressive than it already plans to, which could have major effects on the price consumers pay to borrow money.

How could you be affected?

The bottom line: Life could get more expensive

Now, it remains to be seen whether all of President Trump's proposed tariffs (such as the recently proposed China tariffs) will become long-lasting policy and to what extent foreign governments will retaliate against the U.S. However, if an all-out trade war does come, it could certainly have a noticeable impact on your wallet.