Please ensure Javascript is enabled for purposes of website accessibility
Log In Help Join The Motley Fool
Free Article Join Over 1 Million Premium Members And Get More In-Depth Stock Guidance and Research
By Matthew DiLallo – Apr 24, 2018 at 9:35AM

With oil prices higher than expected, the oil giant appears poised to deliver a strong quarter.

ConocoPhillips (COP 4.29%) worked hard to turn its business around during the oil market downturn. We saw the first glimpse of its ability to thrive, now that prices are on the upswing, at the end of last year when the U.S. oil giant reported $545 million, or $0.45 per share, of adjusted earnings. That result marked a significant improvement from the loss it had posted in the previous year.

Analysts expect profits to further improve in the first quarter since oil kept rising, with the consensus that the company will earn $0.67 per share. Exceeding that mark could provide the stock with the fuel needed to continue rallying. A couple of factors suggest that this outcome isn't a stretch. 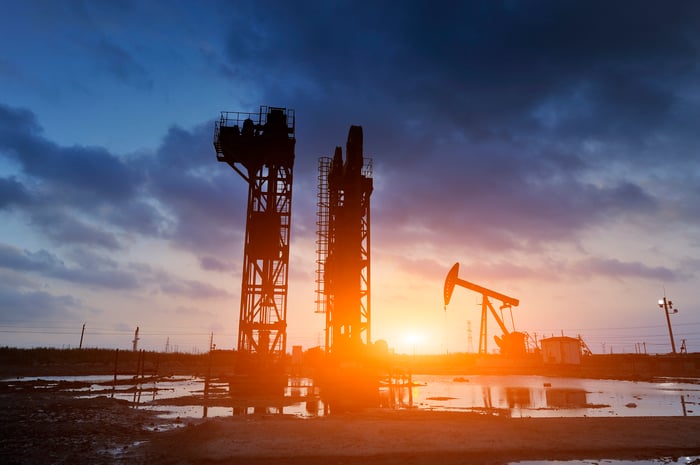 Don't be surprised by a production surprise

Higher oil prices are the key ingredient fueling the anticipation that ConocoPhillips will make more money during the first quarter. That's because its current production forecast is a bit light since the company only expects to produce between 1.18 million to 1.22 million barrels of oil equivalent per day (BOE/D) during the quarter, down 1.6% at the midpoint from the fourth quarter.

However, it's worth noting that this dip is due to a third-party pipeline outage in Malaysia, which caused the KBB field to shut down early in the year. ConocoPhillips said on its fourth-quarter call that it assumed no production from this field during the first quarter. However, if the pipeline came back on line earlier than expected, it could help push output toward or even above its guidance range.

Furthermore, the company also noted that its guidance didn't include any production from its $400 million acquisition of the remaining 22% interest in its Alaskan assets from Anadarko Petroleum (APC). Those assets produced an average of 63,000 BOE/D last year and could provide an incremental boost during the first quarter depending on when it closed. The deal also benefits Anadarko by giving it some cash to beef up its share repurchase program, which it did by adding another $500 million to its $2.5 billion authorization earlier this year.

Anadarko's repurchase program has been the key to driving its stock higher, fueling a 37% rally since it unveiled the plan last fall. ConocoPhillips' stock has also been red-hot over the past year -- rallying nearly 35% -- because the company has been repurchasing shares hand over fist, buying back $3 billion in stock last year, which reduced its share count by 5%. The company had initially expected to repurchase another $1.5 billion this year. However, due to higher oil prices, it bumped that up to $2 billion last quarter.

That program could have helped push earnings past analysts' expectations in the first quarter, depending on timing. If ConocoPhillips spent the entire amount early in the year, it could have reduced its outstanding share count by another 3%, though that's highly unlikely. Instead, the company probably bought back about $500 million in shares throughout the quarter, which might have reduced the share count by 1%. Still, that could be the difference maker between meeting or beating estimates.

Another thing to keep an eye on is whether it increases its buyback authorization now that crude is closing in on $70 a barrel. For a company that based its three-year operating plan on $50 crude, it stands to generate significant free cash flow this year at current prices.

ConocoPhillips ended 2017 on a high note and is poised to take another step forward during the first quarter where it could beat analysts' already bullish expectations. If it does that, shares could continue moving higher in the coming months as long as crude cooperates.