In recent years, Amazon.com (NASDAQ:AMZN) has leaned heavily on the dongle form factor for its line of Fire TV streaming media players. The company introduced a new Fire TV last September that supports 4K and HDR, priced at $70. The basic Fire TV stick is also a hit thanks to its affordable $40 price tag. The original Fire TV was much more of a traditional set-top box that would sit next to your TV instead of dangling from a port behind it.

It looks like the new version could be imminent. 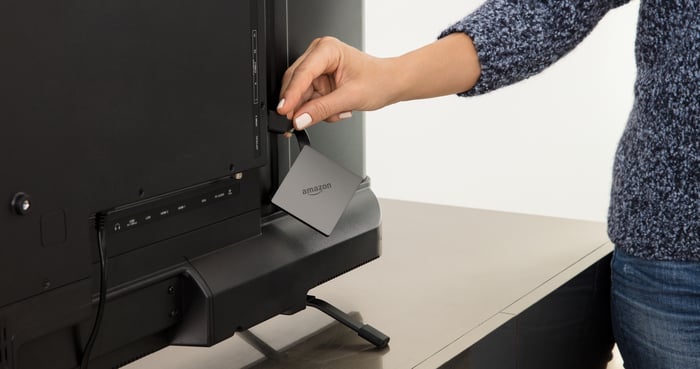 It will be called "Fire TV Cube"

Amazon is now teasing a "Fire TV Cube" product on its website, saying little more than "Details coming soon." It doesn't take a whole lot of imagination to guess what such a product would look like. It also helps that AFTVnews obtained a leaked shot of the device last year, predicting that it would be released in 2017. That report also included the Fire TV with 4K and HDR, which did launch on time, but it seems that the Fire TV Cube wasn't yet ready.

These are the two new Amazon Fire TV models being released in 2017 (Exclusive) https://t.co/na1Tpp7Ftn pic.twitter.com/QhfwzW70om

The Fire TV Cube is expected to feature a far-field microphone and an LED strip, according to the initial AFTVnews report. That would allow it to replicate the functionality that made the original Echo such a sleeper hit: always listening for a wake word that can activate voice controls.

Up until recently, most streaming players have relied on the remote to enable voice controls, requiring users to speak directly into the remote's microphone. That kind of changed last fall when Alphabet (NASDAQ:GOOG) (NASDAQ:GOOGL) subsidiary Google updated Google Assistant to allow it to control Chromecast devices, Google's competing streaming dongle. Users can speak into a Google Home or other device using Google Assistant (like a smartphone), asking the virtual assistant to turn the TV on, among other tasks.

Removing these extra hurdles and directly integrating the always-listening functionality promises a new level of convenience, especially as many customers have already equipped their homes with multiple Echo devices. Those users have already established the behavior of calling out to Alexa from anywhere in the house, knowing Alexa is somewhere within earshot.

What's less clear is what Fire TV Cube will cost, although it's safe to say it will be priced aggressively, given Amazon's typical pricing strategy. In an interview with TechHive at CES earlier this year, Fire TV head Marc Whitten proclaimed that Fire TV was the leading streaming platform in the U.S., Germany, the U.K., and Japan.

That conflicts with Roku, which also claims to have the same title. Whitten lamented that he wasn't allowed to share the hard data, another infamous Amazon characteristic. "We're unfortunately not super transparent in sharing our data out. I'll just say we have the data and we're pretty clear," Whitten added.