Please ensure Javascript is enabled for purposes of website accessibility
Log In Help Join The Motley Fool
Free Article Join Over 1 Million Premium Members And Get More In-Depth Stock Guidance and Research
By Steve Symington – Apr 25, 2018 at 9:00AM

The Roomba maker continues to enjoy strong global demand for its home robotics solutions. Here's what investors need to know.

iRobot Corporation (IRBT 0.23%) announced better-than-expected first-quarter 2018 results on Tuesday after the market closed, highlighting broad geographic growth, its efforts to diversify revenue streams, and the fruits of its recent international distributor acquisitions. The Roomba maker also boosted its earnings guidance for the year.

With shares up modestly in response as of this writing, let's take a closer look at how iRobot started 2018 and what investors should expect from the company in the quarters ahead. 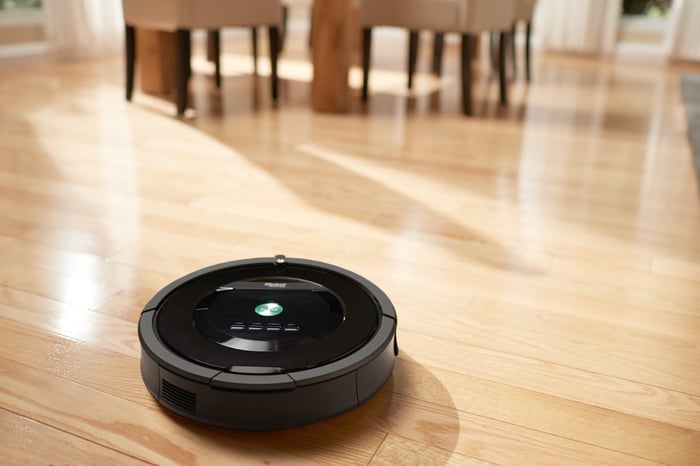 We are off to a very strong start in 2018, and I am very excited about the year ahead. We expect our global business to deliver strong financial performance in 2018 that will fund our ability to reinforce our core product leadership in the [robotic vacuum cleaner] category, widen our competitive moat through technological differentiation protected by our IP portfolio, and extend our product portfolio. We believe that consistent execution of this strategy is the most effective way to drive sustainable growth and shareholder value.

During the subsequent conference call, Angle added that momentum from iRobot's first national TV advertising campaign for its Braava floor-mopping robots (launched in the fourth quarter of 2017) carried over into the first quarter of 2018, driving Braava revenue growth of nearly 35% in the United States.

In fact, iRobot has enjoyed "very strong" demand for Braava wherever it has directed those marketing investments. So, given additional investments to promote the Braava line in 2018, iRobot believes that Braava's full-year domestic revenue growth will continue outpacing that of the company's overall top line.

Angle also addressed ongoing competitive concerns, noting that several premium European brands have launched new robotic vacuums recently, while others have announced their impending entry into the space but haven't launched. Meanwhile, Angle says that the Chinese competitors that entered the U.S. market last year through online channels still haven't gained traction in U.S. retail stores -- though iRobot expects some retailers will likely test some of those products in physical stores later this year.

Still, iRobot has long considered increased competition a good thing, serving more as validation for the home robotics industry than anything else. Still, Angle says iRobot will continue leaning on its R&D roots, successful sales and marketing strategies, and, of course, its patent-enforcement efforts to "validate the strength of our IP and widen our competitive moat while dispelling false claims by competitors."

By comparison -- and while we don't lend much credence to Wall Street's demands -- consensus estimates were predicting 2018 earnings of $2.31 per share on revenue of $1.07 billion.

It remains to be seen how the market will react on Wednesday considering iRobot didn't increase its guidance after so handily beating expectations to start the year. But this was as good a quarter as anyone could have asked of iRobot. And I think patient shareholders should be more than pleased.