Please ensure Javascript is enabled for purposes of website accessibility
Log In Help Join The Motley Fool
Free Article Join Over 1 Million Premium Members And Get More In-Depth Stock Guidance and Research
By Anders Bylund – Apr 25, 2018 at 9:27AM

Even if Cupertino's chip orders came in a bit light this quarter -- and that's not a slam-dunk fact yet -- the semiconductor giant had plenty of other high-growth markets ready to pick up the slack.

Your average analyst would have settled for earnings of $1.11 per share on sales near $3.65 billion. Looking ahead, the company also issued second-quarter guidance just above the current Street tenor.

During the first quarter, TI spent $1.48 billion on a combination of dividends and share buybacks. That's a 19% increase over the year-ago period's $1.05 billion budget for these items. In both cases, TI allocated about 160% of its incoming cash flows to shareholder cash returns, dipping into its cash reserves to keep the payouts and buybacks rolling.

That's business as usual for Texas Instruments, which aims to return essentially 100% of its free cash flows directly to shareholders. That often means tapping its cash reserves in the first half of each fiscal year, where cash flows run a bit lower, making up the balance with a surplus of incoming cash in the back half of the year. 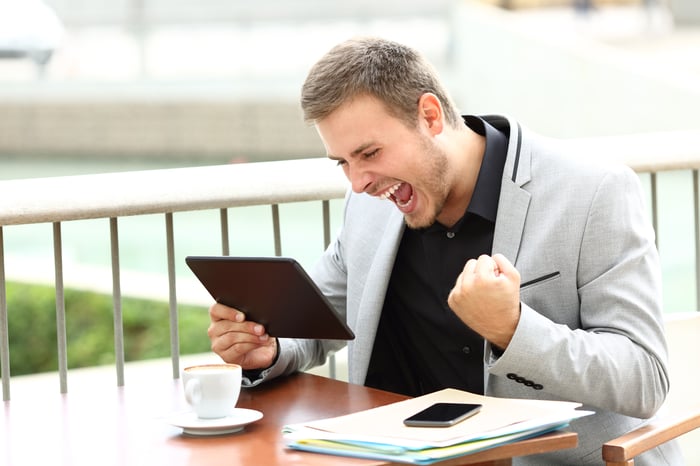 TI shares took a 6% haircut last week when analyst firm Deutsche Bank called the company out as a supplier with exposure to an expected downturn in Apple's smartphone sales. Analyst Ross Seymore noted that Apple accounted for something like 9% of TI's sales last year, so any slowdown in that order flow could make some waves in the chip maker's revenue flows.

If that scenario played out at all, TI was able to mask it through solid performances in other segments. The analog and embedded operating divisions, which together accounted for 92% of TI's total sales in this quarter, grew their sales by roughly 15% year over year. Both segments also expanded their operating margins a bit, as analog profits grew 25% richer while embedded profits rose by 37%.

What's next for Texas Instruments?

The one area that could use a pick-me-up right now would be communications equipment, but that's not news to anyone following this slow buildup to the upcoming explosion of 5G wireless network installations. The technical standards for these next-generation upgrades are still being finalized, leaving both component makers like TI and its end-user customers at the planning table. Torrential orders should follow, just not quite yet.

Besides that obvious opportunity, TI is doubling down on high-growth markets within the automotive and industrial categories. Both of these markets are putting more and more semiconductors into each car, machine, and industrial process, giving TI and its sector peers acres of greenfield growth to explore over the next several years.

Texas Instrument shares closed Tuesday's trading a market-beating 27% above their year-ago prices, with a three-year return of 89%. There's nothing in this first-quarter report that suggests that the surge is anywhere near out of rocket fuel, with or without a healthy dose of Apple orders.

This diversified company can stand on its own.