Chip giant Intel's (NASDAQ:INTC) business performance over the last several years has been exemplary: The company's revenue has grown modestly even as its largest market has declined, and its profitability has surged, thanks to product cost structure improvements, smart marketing actions (e.g. product segmentation), and employee head count reductions.

Although the company's financial performance looks to remain strong in 2018, as it's on track to deliver additional revenue and profit growth, it's worth going over what I believe to be the biggest risk facing Intel in the 2019 time frame (and beyond): its manufacturing struggles. 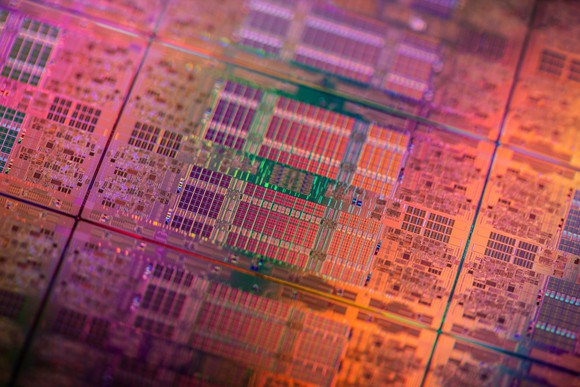 Intel is what is known as an integrated device manufacturer (IDM). This means that the company not only designs the chips that it sells, but it also manufactures them, too. Chip manufacturing is a complex process that requires significant investments in both research and development to figure out how to build the chips as well as in the capital equipment required to put that know-how into practice.

In theory, a chip company that owns and operates its own chip manufacturing plants can realize significant advantages over companies that do not since the chip company can tailor its manufacturing technology to its exact product needs.

There is a risk, though. Coming up with next-generation chip manufacturing techniques is extremely difficult, and if a company stumbles as others march ahead, in-house manufacturing can quickly go from a competitive advantage to a competitive disadvantage.

If a company's entire product portfolio depends on the manufacturing technology organization bringing out new technologies on time and serious issues arise with the technology, that company could find itself unable to release new products in a timely fashion.

That pitfall, unfortunately, appears to be at high risk of materializing with Intel's upcoming 10-nanometer chip technology.

Intel was supposed to go into production of chips built using its 10-nanometer technology by the end of 2015, but because the technology proved more difficult for the chipmaker to tame than it had expected, it couldn't meet that schedule.

So, what the company did was try to give its older 14-nanometer technology -- which went into volume production in the middle of 2014 -- a new lease on life by doing significant engineering work to improve the performance of the technology. That increased performance was ultimately used to deliver faster, more efficient products.

14nm++ was put to good effect and allowed Intel to, once again, assemble a good portfolio of products for 2018.

The problem for the company, however, is that there are credible rumors swirling that its 10-nanometer technology -- which is already about three years late -- still isn't in good shape and might not even go into volume production in the second half of 2018 as Intel expects it to.

In that case, Intel could have a hard time delivering new products to support its partners' product launches in the first half of 2019. Indeed, a large percentage of Intel's business -- including its core PC and data center processor businesses, as well as its new, fast-growing ones like cellular modems -- will require that Intel's 10 nanometer is in workable shape by the end of 2018 for product launches throughout 2019.