Please ensure Javascript is enabled for purposes of website accessibility
Log In Help Join The Motley Fool
Free Article Join Over 1 Million Premium Members And Get More In-Depth Stock Guidance and Research
By Adam Levine-Weinberg - Apr 25, 2018 at 6:34AM

Shares of Volaris lost a third of their value in the span of two days following the company's ugly first-quarter earnings report. But its stellar cost structure and strong balance sheet give the company the tools to make a comeback.

In late 2016 and early 2017, profitability deteriorated rapidly at Mexican budget airline Volaris (VLRS 0.21%) due to market disruptions caused by the U.S. presidential election. Fears about a crackdown on trade or immigration under President Trump led to a sharp drop in the Mexican peso and a downturn in travel demand. However, Volaris seemed to be on the mend by this time last year, and its stock price rebounded to more than $15 last July.

Unfortunately, nothing has gone right for the ultra-low-cost carrier since then. Profitability has plunged again due to overcapacity in many of its markets and rising fuel prices. Last Friday, the company released a disastrous first-quarter earnings report. Volaris stock -- which had already fallen more than 40% from its July 2017 highs -- lost more than a third of its value within two days, before recovering somewhat on Tuesday. 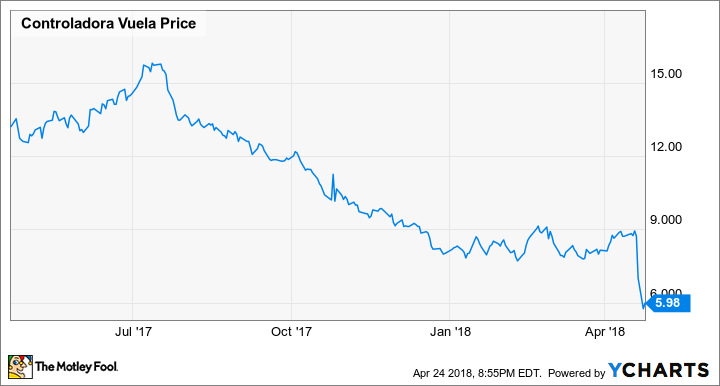 While Volaris' recent earnings trajectory doesn't provide much reason for optimism, the current competitive environment is clearly unsustainable. Volaris' cost structure and balance sheet are significantly better than those of its main competitors, which gives the carrier solid long-term prospects despite its recent challenges.

Volaris takes a turn for the worse

In the first quarter, total revenue per available seat mile (RASM) fell 7.7% year over year at Volaris (measured in local currency). Domestic routes suffered from severe overcapacity, while the international market is still recovering from last year's downturn in demand, as well as higher competition following the late-2016 liberalization of the U.S.-Mexico air travel market.

This sharp RASM decline would have been bad news under any circumstances, but it was particularly unfortunate given that fuel prices are rising. The only saving grace in Volaris' earnings report was that nonfuel unit costs decreased by 9.1% last quarter.

Management is focused on unit costs

In response to Volaris' recent profit challenges, management committed to achieving further unit cost reductions this year. CEO Enrique Beltranena said that the carrier intends to reduce nonfuel unit costs (measured in dollars) to 4.5 cents or less by the end of the summer. That would compare to around 4.8 cents last quarter and a little under 5 cents in the second half of 2017. 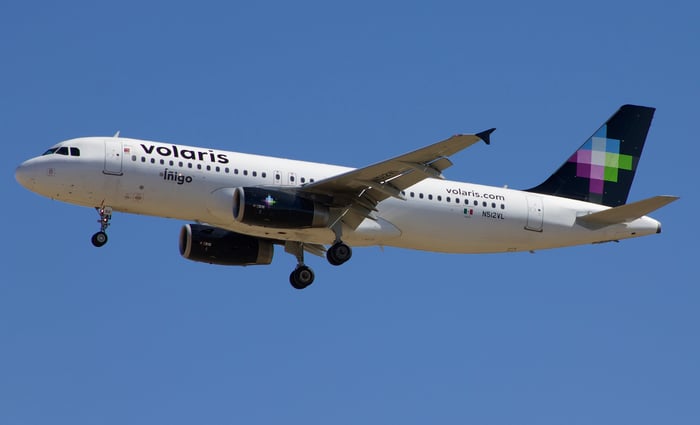 Fleet changes will be a key driver of these projected cost savings. Volaris recently received its first Airbus (EADSY 0.32%) A321neo. Each A321neo has 230 seats: 27% more than the average for the rest of Volaris' fleet. The extra seats lead to lower nonfuel unit costs, as well as better fuel efficiency.

Volaris will receive another four A321neos from Airbus later this year, allowing it to grow in Mexico City, where slot constraints have kept the competitive environment more rational. It is also scheduled to replace four older 144-seat Airbus A319s with seven new A320neos. This move will also help drive unit costs down (including fuel costs).

In fact, Volaris is likely to replace virtually its entire fleet with A320neos and A321neos over the next decade. In total, it has about 120 aircraft on order with Airbus.

The downside to management's determination to reduce unit costs is that Volaris is contributing to the industry's overcapacity. The carrier might be able to mitigate its losses by cutting its worst-performing flights. However, management has not been very aggressive in this respect, because capacity cuts would reduce productivity and aircraft utilization, driving up unit costs. (To be fair, Volaris recently shifted some capacity from Mexico to its new Central American subsidiary, which is based in Costa Rica.)

The good news for Volaris shareholders is that the current competitive environment in Mexico is clearly unsustainable. Volaris' competitors are also facing margin pressure. In the long run, market forces will inevitably push supply and demand back toward a sustainable equilibrium.

That process could involve the bankruptcy of one or more airlines. Volaris is in great shape from this perspective, as it has the best balance sheet in the industry, with more cash than debt. By contrast, Interjet is in particularly bad shape -- it has about $750 million of debt -- and has been in danger of running out of cash recently. Volaris also has a much lower cost structure than Interjet. As a result, if the market takes a turn for the worse, Volaris would almost certainly survive, while Interjet might not.

There's no way to know when market conditions might improve for Volaris. The company's results will likely remain volatile for the foreseeable future. However, I plan to hold on to my shares, as I believe that Volaris' low cost structure and solid balance sheet will enable it to be very successful in the long run.