The online marketplace delivered as promised and reaffirmed guidance. But that wasn't enough to excite investors.

But shares of the online marketplace platform provider dropped after it merely reiterated its full-year guidance. So let's take a closer look at how eBay kicked off the new year, and what investors can expect from the company moving forward. 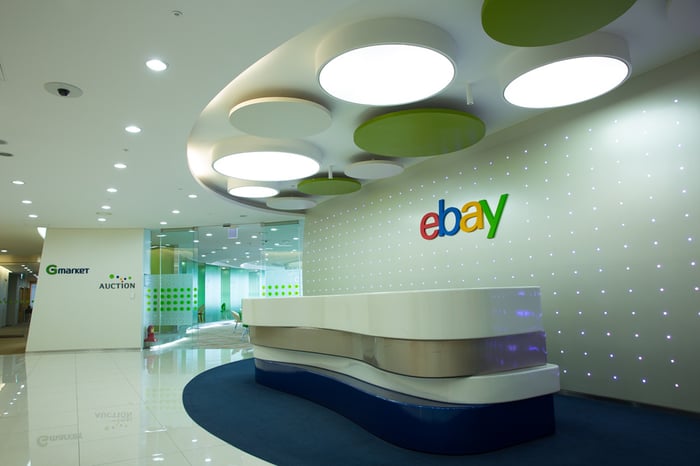 "In Q1 we drove good growth and made further progress with our multiyear effort to transform our customer experience and sharpen the eBay brand," stated eBay CEO Devin Wenig.

During the subsequent conference call, Wenig noted that eBay shifted its focus this quarter to improve the quality of organic traffic, including a redesigned commerce experience that sends a subset of buyers in the U.S. directly to product-based search results.

"This is an important first step toward moving a material amount of our GMV to product-driven experiences over time," Wenig added. "[...] We believe this will simplify eBay's search as well as better highlight our natural inventory and price advantages."

For the second quarter of 2018, eBay expects revenue between $2.64 billion and $2.68 billion, good for steady currency-neutral growth of 6% to 8%. That should translate to adjusted earnings per diluted share of $0.50 to $0.52. By comparison -- and while we don't usually pay close attention to Wall Street's demands -- the midpoints of both ranges were below expectations, which had called for adjusted earnings of $0.52 per share on revenue of $2.69 billion.

Finally, eBay reaffirmed its full-year guidance calling for 2018 revenue between $10.9 billion and $11.1 billion, and for 2018 adjusted earnings per share of $2.25 to $2.30. By comparison, investors were hoping for earnings of $2.29 per share -- near the high end of eBay's anticipated range -- on revenue right at the midpoint of guidance.

So contrary to what today's nearly 6% pullback might indicate, this wasn't a terrible quarter from eBay. But with shares up more than 24% over the past year leading into this report -- a move aided by last quarter's stellar showing and better-than-expected outlook -- it's no surprise to see the stock falling in response.