Snap (NYSE:SNAP) may have eaten a $39.9 million charge related to its first-generation Spectacles, the majority of which was due to excess inventory, but that hasn't deterred the "camera company" from developing consumer hardware. It's been clear that second-generation Spectacles were in the works, including a FCC filing that was recently spotted. The Snapchat operator has just officially unveiled the new product. 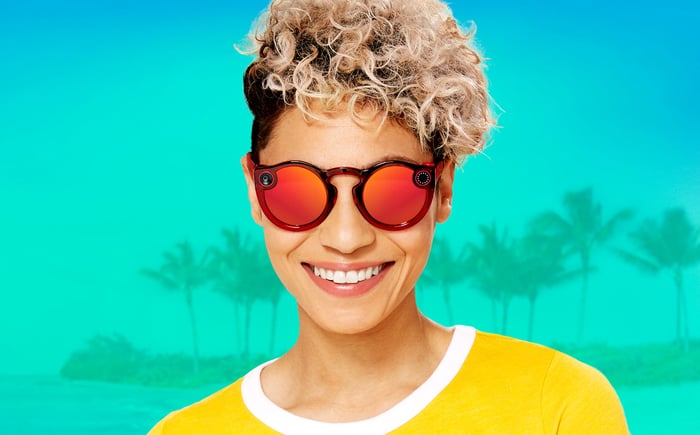 For starters, the new Spectacles look almost exactly like the original version, but with some incremental refinements. The wearable camera is now thinner and lighter, particularly the assembly that houses it and other internals. Spectacles 2 are now water resistant, so users can submerge them up in up to 1 meter of water for 30 minutes to record underwater Snaps. In addition to video, the new version also has a photo mode.

Snap has improved the transfer speeds associated with transferring photos and videos from the Spectacles to your smartphone, although the process is still a bit cumbersome. All content is now recorded in HD, instead of giving users the option of capturing in HD or SD.

The company has also dropped the distribution gimmick. The original version was only available through special vending machines initially, which helped contribute to the perceived scarcity and marketing hype. Snap is selling Spectacles 2 directly online. In terms of price, Spectacles 2 will run you $150, up from $130 for the previous generation.

Will they flop, too?

As far as whether or not Spectacles 2 will be some breakthrough product: They won't. The new version is largely an evolutionary update to the original vision. Plus, it's worth noting that original Spectacles engagement was extremely poor. Based on public disclosures, I estimated that Spectacles contributed a mere 0.002% of all Snaps created in Q1 2017, the first full quarter following launch. Many users stopped using them after the initial novelty wore off. Spectacles 2 will not propel Snapchat into mainstream social media.

It's hard to imagine the second-generation models being worth the time and effort that Snap has allocated into developing them. Regarding the write-off that Snap incurred previously, that was largely a forecasting misstep, as Snap misgauged demand and ordered more units than it could sell. Nearly $18 million of the $40 million charge was attributable to canceling inventory purchase commitments. If Snap is able to forecast demand more accurately this time, it can potentially avoid similar writedowns, even if Spectacles 2 don't end up selling very well.