Please ensure Javascript is enabled for purposes of website accessibility
Log In Help Join The Motley Fool
Free Article Join Over 1 Million Premium Members And Get More In-Depth Stock Guidance and Research
By Matthew DiLallo – Apr 27, 2018 at 10:00AM

The hotel REIT's financial results came in above the top end of its updated guidance range.

Improving business travel demand during the first quarter drove Pebblebrook Hotel Trust (PEB -0.48%) to update its outlook earlier this month. Those travel trends turned out to be stronger than even its more optimistic expectations, helping the company to deliver results that were above the updated forecast. Because of that, the company is even more encouraged about what lies ahead in 2018. 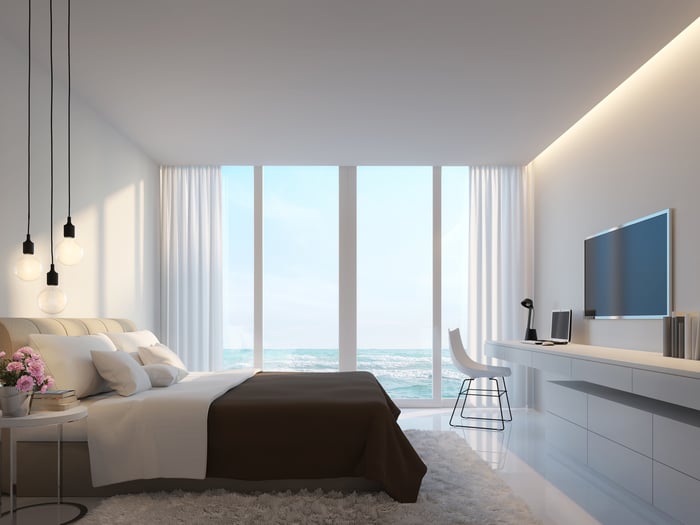 We're extremely pleased with our portfolio's first quarter operating performance, which significantly exceeded our initial outlook, as our results were much stronger than expected. We are encouraged by the improved business travel demand trends we're seeing, including increased short-term group and transient bookings, better group attendance and increased overall group spend. Leisure demand also continued to be solid. The overall improvements in business travel were broad-based across our portfolio, which enabled us to handily beat our outlook for Same-Property RevPAR growth, Adjusted EBITDA and Adjusted FFO per diluted share. These favorable demand trends have continued into the second quarter, which is encouraging, and makes us more optimistic about overall industry performance for 2018, as well as for our portfolio.

That optimism shows in the company's revised guidance for 2018. Overall, Pebblebrook sees AFFO landing in the range of $178 million to $186.5 million, which is about 3.2% higher at the midpoint than its initial outlook. It now expects AFFO per share ranging between $2.56 and $2.69, which would be as much as a 4.7% improvement from 2017.

One other item to keep an eye on is the company's attempts to acquire rival LaSalle Hotel Properties (LHO). Pebblebrook has made three unsolicited offers; the latest and final one was for $32.49 per share, which is a 33.2% premium to LaSalle's stock before Pebblebrook made its first offer of $29.95 a share a month ago. Pebblebrook has already strategically purchased 4.8% of LaSalle's outstanding shares in hopes of pushing toward an agreement.