Please ensure Javascript is enabled for purposes of website accessibility
Log In Help Join The Motley Fool
Free Article Join Over 1 Million Premium Members And Get More In-Depth Stock Guidance and Research
By Keith Speights – Apr 27, 2018 at 8:16AM

Investors had one primary question for athenahealth, Inc. (ATHN) prior to the company's first-quarter earnings report: Can the momentum continue? Athenahealth ended 2017 on a positive note, returning to solid growth in the fourth quarter.

The cloud-based healthcare applications provider answered that question after the market closed on Thursday. Here are the highlights from Athenahealth's quarterly update. 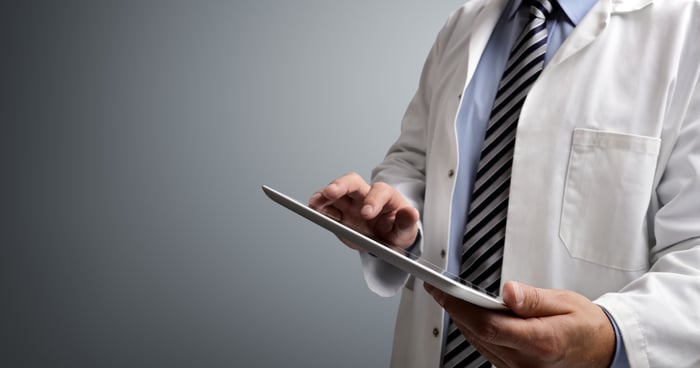 Many companies would be happy campers with the year-over-year sales growth of over 12% reported by Athenahealth. This performance exceeded what some observers expected. However, it's significantly lower than what the company has been accustomed to in the past and reflected a decline from revenue recorded in the fourth quarter of 2017.

The great news for Athenahealth was its tremendous improvement on the bottom line. This improvement is a direct result of the company's cost-cutting initiative announced in October 2017. Athenahealth's selling and marketing expense decreased 24% compared to the prior-year period, savings that rolled down to its net income.

There was also good news with the company's network growth metrics. The number of providers on athenaOne Collector increased 15% year over year, while the number of providers on both athenaOne Communicator and Clinicals applications jumped 20% higher than the prior-year period. Covered lives on Athenahealth's population management platform increased by 21% year over year. The biggest improvement came from the athenaOne hospital product, with discharge bed days soaring 194% from the first quarter of 2017.

Aside from the financial and network growth results, the biggest news for Athenahealth in the first quarter was that the company's board of directors appointed a new chairman -- former GE chairman and CEO Jeffrey Immelt. Jonathan Bush had been chairman of the board since the company's founding.

Athenahealth CEO Jonathan Bush stated, "We had a good start to the year. We continued to build on our position as the most connected network in healthcare with strong growth in the number of providers on our network during the first quarter." Bush added:

We remain focused on transitioning to a platform company that aims to unleash our collective potential to transform healthcare. Throughout 2018, we're committed to taking more work off of clients' plates and delivering additional capabilities that deepen our services, lower costs, and enable a better experience for patients and providers.

Athenahealth reaffirmed the full-year 2018 guidance provided at its investor summit held on Feb. 15, 2018. The company continues to expect revenue between $1.31 billion and $1.38 billion in 2018. GAAP operating income is projected to be in the range of $108 million to $152 million. Athenahealth projects that non-GAAP operating income will be between $210 million and $235 million.

One thing for investors to watch closely in the coming months is how much new business Athenahealth picks up. The company cut back significantly in the sales and marketing area. Such cuts can sometimes help reduce costs but ultimately result in lower sales. However, Athenahealth's outlook calls for continued sales growth, so the company could be able to be more productive even with fewer staff.